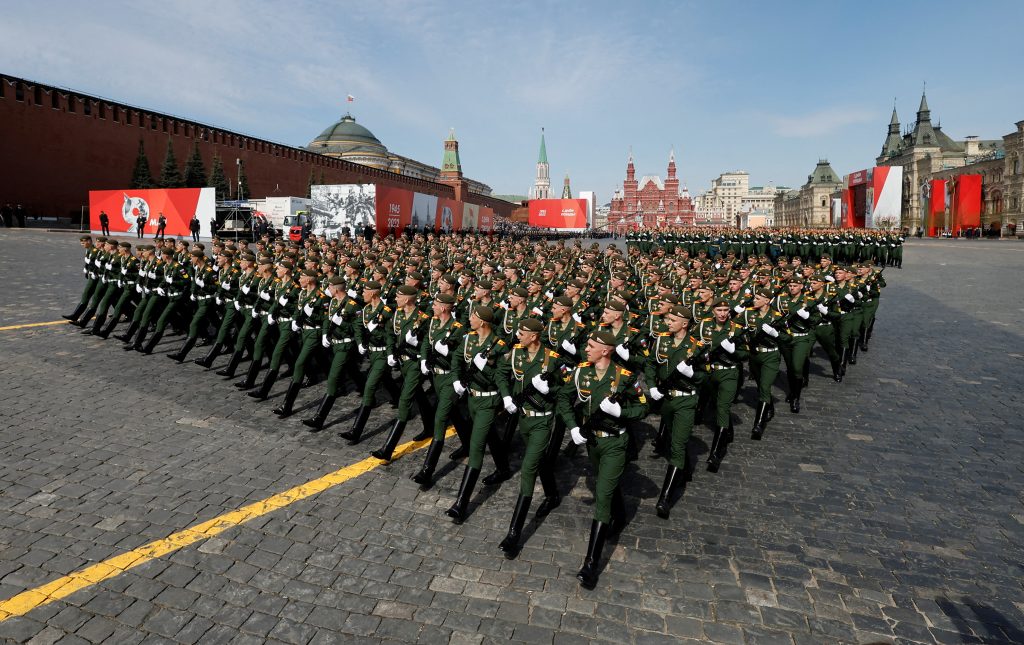 Military parades will take place across Russia on May 9 as the country honors the defeat of Nazi Germany with traditional Victory Day celebrations.

This holiday dates back to the end of WWII but it has undergone a dramatic upgrade during the reign of Vladimir Putin. Since coming to power at the turn of the millennium, Putin has transformed veneration of the Soviet victory over Nazi Germany into something approaching a religious cult and has placed it at the heart of modern Russian national identity.

Under Putin, Victory Day has become the holiest day on the Russian calendar and a ubiquitous feature of patriotic propaganda. Meanwhile, anyone who dares question the Kremlin’s highly sanitized version of the “Great Patriotic War,” as WWII is still known in Russia, is treated with a severity once reserved for medieval heretics.

Putin’s victory cult serves a number of useful functions for the Kremlin. It has proved remarkably effective in reviving Russian patriotism following the humiliation of the Soviet collapse and the missed opportunities of the 1990s. It has also provided the perfect antidote to grim revelations of Stalinist terror while helping to whitewash the extensive crimes against humanity committed by the USSR during and after WWII.

The contemporary political implications of this victory cult go far beyond the need to reconcile modern Russians with their country’s troubling twentieth century history. By rehabilitating the Soviet past, Putin has succeeded in legitimizing the authoritarian present.

Throughout Putin’s reign, Russia has enthusiastically deployed the language and symbolism of WWII as rhetorical weapons against the country’s perceived enemies, who are routinely denounced as “fascists” and “Nazis.” The list of domestic and international targets is necessarily long and includes more or less anyone who disagrees with the Kremlin. However, pride of place is reserved for Ukraine, which has long been portrayed by Russian officials and propagandists as the heir to Nazi Germany.

In recent years, this mythmaking has become a matter of life and death for millions of Ukrainians. Ever since the 2014 seizure of Crimea, the propaganda narrative of “Nazi Ukraine” has been used extensively to justify further Russian aggression against the country. Unsurprisingly, Putin claimed in his February 24 declaration of war that the primary goal of the current invasion was the “de-Nazification” of Ukraine.

For adherents of Putin’s victory cult, Ukraine’s Nazi status has become an article of faith that requires no evidence or further explanation. This belief in the “Nazi Ukraine” narrative has remained unchanged despite inconvenient facts such as the complete absence of far-right parties in the Ukrainian government or the 2019 election of Jewish Russian-speaker Volodymyr Zelenskyy as Ukrainian president.

Over the past ten weeks of full-scale warfare, the terms “Ukraine” and “Nazi” have become virtual synonyms within the Kremlin media bubble. Indeed, a high-profile article published by Russian state news agency RIA Novosti in April stated explicitly that “de-Nazification” actually meant “de-Ukrainization” and anticipated the destruction of the Ukrainian nation.

Russsia’s so-called “special military operation” in Ukraine is so inundated with false historical narratives rooted in Putin’s victory cult that much of the war-related commentary now coming out of the Kremlin is completely detached from reality and impossible to decipher without reference to the Kremlin’s twisted WWII mythology. This was most recently demonstrated by Russian Foreign Minister Sergei Lavrov’s anti-Semitic outburst on Italian TV, which saw him claim that Zelenskyy’s Jewish identity meant nothing as “Hitler also had Jewish blood.”

Putin and his colleagues desperately need a history lesson in the realities of WWII and the Soviet role in the conflict. While the Western allies were armies of liberation during WWII who brought democracy and long-term stability to much of Europe, the Red Army led an occupation that left tens of millions trapped behind the Iron Curtain. Modern Russia still refuses to recognize this uncomfortable truth, preferring instead to accuse the nations of Central Europe of ingratitude.

Every nation needs to question its past. Unfortunately, the Russian Federation under Vladimir Putin is actively engaged in denial. This includes attempts to justify many of the most shameful episodes of the Soviet era. The Kremlin is particularly sensitive to discussion of the August 1939 Nazi-Soviet Pact which divided Eastern Europe and directly sparked WWII. Putin has gone to remarkable lengths to defend the Molotov-Ribbentrop Pact and has criminalized any attempts to suggest Soviet responsibility for the outbreak of war.

Modern Russia’s victory cult also seeks to nationalize the allied defeat of Hitler. It makes almost no mention of the US Lend-Lease Act that provided the USSR with close to USD 160 billion (in current dollar terms) in weapons and other vital supplies. Likewise, Putin’s transformation of Victory Day into a celebration of Russian nationalism means that the countless soldiers from other Soviet republics are largely airbrushed out of the Kremlin’s WWII narrative. Needless to say, rose-tinted Russian coverage of the war largely ignores the staggeringly callous use of Soviet troops as cannon fodder or the hundreds of thousands of Red Army soldiers executed by their own comrades.

Meanwhile, the Kremlin reacts with fury and indignation whenever attention is drawn to the widespread accounts of mass rape and other atrocities as the Red Army advanced into Central Europe. Russia’s failure to officially acknowledge these crimes is not merely an historical injustice. On the contrary, Moscow’s glorification of the perpetrators has helped create a sense of impunity that paved the way for the strikingly similar atrocities witnessed in recent months throughout the occupied regions of Ukraine.

Stalin’s vindication after WWII is one of the factors that makes Putin so reckless now. If Stalin could stand tall among the winners despite his heinous crimes and complete disregard for human life, why shouldn’t Putin accomplish something similar? The West’s readiness in 1945 to allow the partition of post-war Europe was a betrayal of Western values that sanctioned the triumph of one authoritarian system over another. Putin expects today’s Western leaders to display similar moral flexibility on the subject of Ukraine.

For the past two decades, Putin has distorted and weaponized the Soviet WWII experience in order to revitalize Russian nationalism and justify an expansionist foreign policy. The sheer scale of Soviet losses in the fight against Hitler has made many outside observers reluctant to criticize this trend, but it is now clear that Putin’s victory cult is a recipe for international aggression. It has created a menacing climate of militarism within Russia that has already spilled over into Ukraine with catastrophic consequences. Unless this cult is confronted and condemned, other countries will suffer a similar fate.

Image: Russian service members march during a rehearsal for a military parade marking the anniversary of the victory over Nazi Germany in World War Two in Red Square in central Moscow. May 7, 2022. (REUTERS/Maxim Shemetov)