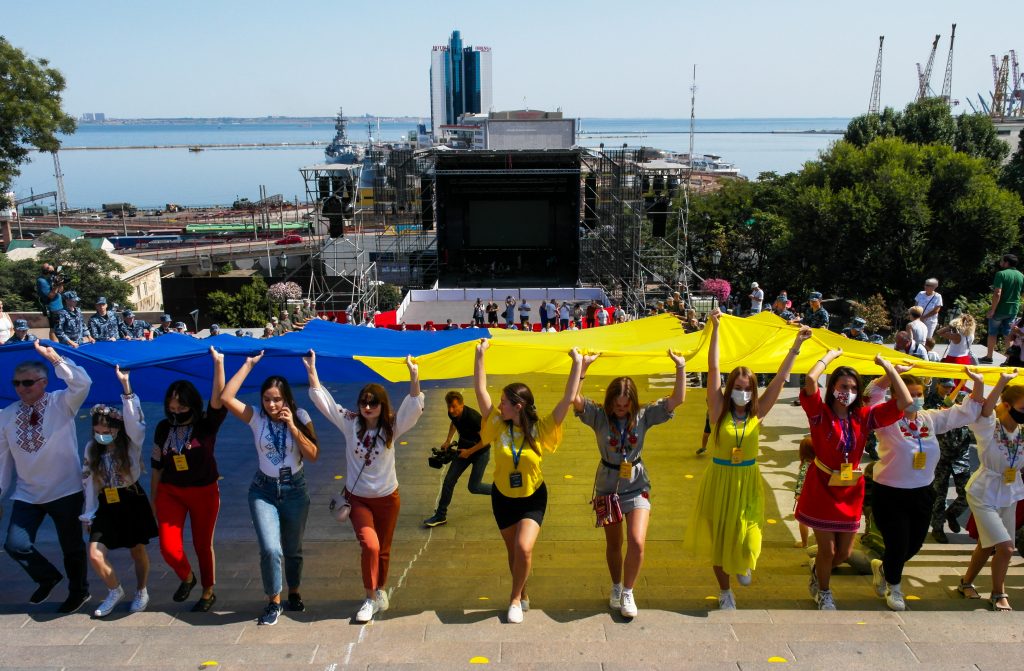 August 24 was the thirtieth anniversary of Ukrainian independence. Turning 30 is an important moment, as we remain young enough to achieve anything yet old enough to look back on our experiences and learn from them. This is also the case with independent Ukraine.

Now is a good time to reflect on Ukraine’s journey so far, and to find ways to guide the country towards a successful future. How do people across Ukraine feel about the key events of the last thirty years? Which values, passions, and behaviors unite or divide Ukrainians? What, ultimately, does independence mean to Ukrainians? And how can we make independent Ukraine more resilient?

These are the kinds of questions the Arena Initiative and Public Interest Journalism Lab have been asking in more than 20 focus groups carried out over the last six months with participants from a range of ages, demographics, and regions across Ukraine, including groups in the temporarily occupied areas of Ukraine. The results of this research make for a compelling snapshot of Ukraine’s nation-building progress as the country enters its fourth decade of statehood.

Let’s start at the beginning: when did Ukraine gain independence? This may seem like a straightforward history question, but we found that some Ukrainians favor different views on when Ukraine became genuinely independent. Many say 1991, but others cite the start of the war with Russia in 2014 as the moment when Ukraine truly achieved independence. Some respondents told us that even to this day, Ukraine still cannot be considered entirely independent.

While attitudes towards Ukrainian independence may differ, there are numerous factors bringing Ukrainians closer together. The list begins with people’s common experience of hardship and resilience. The initial euphoria of independence in 1991 was quickly replaced by instability and fear during the economic hardships of the 1990s. People across Ukraine proudly remembered how creative, hard-working and resourceful they had to be during those challenging years of post-Soviet transition in order to adapt to an unfamiliar and often hostile environment. Against the odds, they managed to find new jobs that frequently required unfamiliar skills.

This common reservoir of resilience needs to be stressed much more in modern Ukrainian public discourse. We should explore the toughness Ukrainians acquired as a result of post-Soviet turbulence. This is a subtle but important shift away from merely complaining about how difficult things have been for Ukrainians, which often leads people towards more paternalistic attitudes. Instead, articulating past traumas should lead to greater pride and agency.

We found that most Ukrainians across the country actually agreed with the underlying values that inspired these popular uprisings. They agreed that having your vote counted is a right, that the falsification of votes in 2004 was wrong, and that the beating of student protesters in 2014 was an outrage.

Ukrainians across the country feel proud of Ukrainian efforts to fight for civil rights. These shared values should be factored in whenever we explore politically charged topics like Ukraine’s two post-Soviet revolutions, which can easily seem divisive at first glance.

Attitudes and values are not the only things that unite Ukrainians. Perhaps even more important are shared, near-unconscious behaviors that have been shaped by Ukraine’s many centuries of pluralistic history.

Despite the existence of different and sometimes deeply incompatible views, we found that disagreements rarely translated into deep-seated attitudes of intolerance. This very Ukrainian brand of tolerance may come as a surprise given the often divisive nature of political debate in post-Soviet Ukraine. But if we look back at Ukraine’s history, and especially at the cosmopolitan nature of daily life in such traditionally diverse cities as Lviv, Chernivtsi, and Odesa, then it seems far less surprising. Perhaps the endless debate about what “ideas” unite Ukrainians should also highlight how Ukrainians are united by shared patterns of behavior that are more core than abstract.

Our research identified one group in today’s Ukraine that is often marginalized by others. People in regions of Ukraine currently under Russian occupation feel forgotten, and it doesn’t help that the rest of Ukraine sees them as “victims of Russian propaganda.”

In fact, people from Russian-occupied Ukraine who participated in our focus groups proved themselves more than capable of understanding and analyzing the propaganda all around them. The vast majority we spoke to dreamed of a “return to normality” and were nostalgic for their lives before 2014.

While our research identified many factors that unite Ukrainians, we also found that one critical element was largely lacking. All strong nations need a sense of interdependence, meaning that people from each separate region understand how their livelihoods and well-being depend on the rest of the country. In today’s Ukraine, this feeling is still weak.

The relative absence of interdependence also undermines how Ukrainians see world affairs. Many of the people we spoke to equated “independence” with freedom from any international commitments. This is a barrier to Ukraine’s nation-building progress. People must understand that their daily behaviors collectively determine the well-being of their communities, if they are also to recognise the role they play in the life of their regions, their country, and the wider world.

One event that participants in our focus groups kept coming back to was the Euro 2012 European football championship, which Ukraine co-hosted together with Poland. The emotions aroused by Euro 2012 neatly capture many of the broader issues we encountered.

For people living in Russian-occupied parts of Ukraine, Euro 2012 engendered a sense of nostalgia for a time before war broke out. For Ukrainians across the country, it was a symbol of how Ukrainians can work together to create something successful that is respected and appreciated on the global stage. Euro 2012 also generated a sense of openness to the world, with unprecedented numbers of friendly foreigners visiting Donetsk and other Ukrainian cities. With this in mind, next year’s tenth anniversary of Euro 2012 represents a golden opportunity to revive and reinforce these positive and unifying feelings.

Peter Pomerantsev is Director of Arena. Jaroslava Barbieri is a Doctoral Researcher at the University of Birmingham. Oksana Lemishka is an Associate at the Centre for Sustainable Peace and Democratic Development. Maria Montague is a Projects Manager and Researcher at Arena. Denys Kobzin is Director of the Kharkiv Institute for Social Research. Volodymyr Yermolenko is Chief Editor at UkraineWorld.org. Vitalii Rybak is an Analyst at Internews Ukraine. Nataliya Gumenyuk is Co-Founder of the Public Interest Journalism Lab. Angelina Kariakina is Co-Founder of the Public Interest Journalism Lab.

UKRAINE AT 30: What is independent Ukraine’s greatest achievement?

Ukraine marks 30 years of independence this week with much to celebrate and plenty to regret. The Atlantic Council invited a range of experts to share their thoughts on independent Ukraine’s greatest achievements.