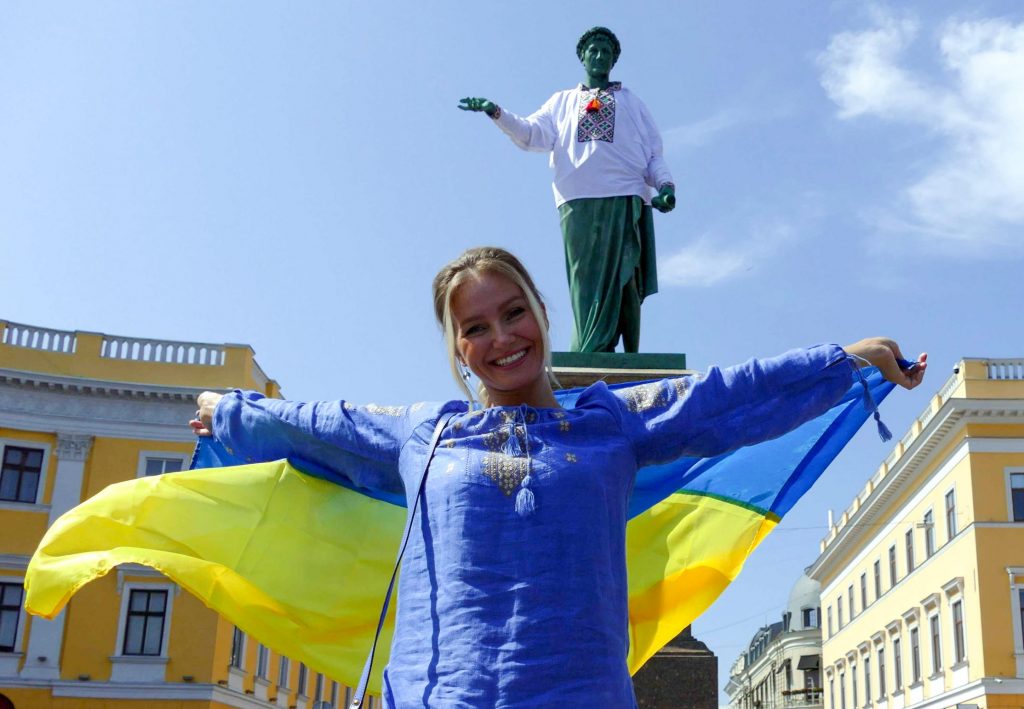 Ukraine marks 30 years of independence this week with much to celebrate and plenty to regret. Three decades after the Soviet collapse, today’s Ukraine remains among Europe’s poorest and most corrupt countries, but it has succeeded in consolidating the transition to democracy and cultivated a strong sense of national identity that has helped Ukrainians to reclaim their past and choose their own future.

Nobody would deny that the past 30 years of modern Ukrainian history have been extremely eventful. Notable landmarks include two separate revolutions and an ongoing undeclared war with Russia. As Ukrainians celebrate this year’s big independence anniversary, the Atlantic Council invited a range of experts to share their thoughts on Ukraine’s greatest achievements during the past three decades of statehood.

Miriam Kosmehl, Senior Expert Eastern Europe, Bertelsmann Stiftung, Germany: Ukraine never gave up on the pursuit of freedom. As a result, Ukrainians are now living the old idea of Ukraine as a member of the European community of nations, while at the same time facing the challenge of reforming their country’s political, legal, and economic systems and defending its sovereignty and territorial integrity. In many cases, Ukrainian society has taken on tasks that the Ukrainian state was not yet able to perform.

An open society has emerged in independent Ukraine. This process of finding common ground and opposing irresponsible state authorities began with the public response to the Chornobyl disaster in 1986 and continued with the first Maidan protest movement in 1990. Civic engagement has remained a prominent feature of Ukrainian society ever since.

While the pace of progress in reforms leaves much to be desired, grassroots political mobilization against injustice must be reckoned with in today’s Ukraine. There is still no equality of opportunity to translate activism into political influence, but there is freedom of speech and freedom of assembly. The Ukrainian people have defied a number of attempts to turn back towards a more authoritarian system of government, first during the Kuchma era and then under Yanukovych.

Despite Russian intervention in 2014, Ukraine has remained united and diverse, and has rejected efforts to divide the country along linguistic, historic, religious, or ethnic lines. Instead, most Ukrainians have embraced the idea of a multilingual and multicultural political nation. In that sense, Kremlin aggression has helped to consolidate Ukraine’s national idea.

Danylo Lubkivsky, Director, Kyiv Security Forum: In my opinion, the greatest achievement during the past 30 years of restored Ukrainian independence is the clear progress in Ukraine’s nation-building journey. This nation-building progress has been gradual but irreversible, reflecting the will of Ukrainians and their democratic aspirations.

For centuries, Ukraine was divided among its neighbors. This makes the national consolidation of an independent Ukraine an historical process of exceptional significance. The overwhelming majority of Ukrainians believe in democratic ideals and principles. They stand for Ukraine’s membership in the EU and NATO, and are ready to defend their country’s independence.

For the past seven years, Ukraine has been resisting Russian aggression and effectively countering the Kremlin. This highlights Ukraine’s geopolitical importance as a bastion of democracy in Eastern Europe and as an opponent of attempts to revive the ghosts of imperialism and authoritarianism in the wider region. As Ukraine consolidates its independence further, the country’s role in world affairs and global democracy will continue to grow.

Lisa Yasko, Ukrainian MP, Servant of the People party: The restoration of Ukrainian independence in 1991 was something fought for and dreamed about for centuries. At the time, many prominent Ukrainians differed over the best future path for the country. However, three decades on, all would be proud to see their contributions recognized as the modern Ukrainian state marks its thirtieth anniversary. Our nation-building efforts and the struggle to defend Ukraine continue to take their inspiration from national bard Taras Shevchenko’s words, ‘In one’s own house, one’s own truth.”

One of the brightest achievements of the past thirty years has been the blossoming of Ukrainian creativity. This creative impulse has fueled our fight for freedom and driven the pursuit of Euro-Atlantic integration through two separate revolutions. In the private sector, Ukrainian creativity has helped establish a new tech-driven business environment. It has produced countless world-class fashion designers, actors, writers, and artists, while also enabling the country to win the Eurovision Song Contest twice.

Ukrainian creativity is becoming more and more internationally recognized. Thanks to the fall of the Iron Curtain, Ukraine has been able to reengage with the wider global community. Since 1991, millions of foreigners have discovered Ukraine for themselves, and have been struck by the mood of creativity and youthful freedom they have encountered. The revolutions of 2004 and 2014 played an important role in fueling this Ukrainian Renaissance and succeeded in enriching our national identity. Today’s Ukrainians now increasingly see themselves as an ancient European nation with roots stretching back a thousand years to the Kyiv Rus era and with much to offer the outside world.

Iuliia Mendel, TV host, Ukraina Channel: I am proud to live in a country that enjoys the greatest freedoms in the post-Soviet space. Ukraine is now rightfully recognized as the largest democracy to emerge following the collapse of the Soviet Union three decades ago. This achievement did not come about easily. Independent Ukraine has experienced considerable political turbulence for many years, including two post-Soviet revolutions. As a result, today’s Ukraine is now inextricably linked with core Western values and has become a source of inspiration for many others within the former USSR.

There is still much to do. Ukrainians must build stronger state institutions and carry out a huge number of reforms, while at the same time creating a globally competitive economy and realizing Ukraine’s vast untapped potential. Most of all, we must unite Ukrainians around the shared dream of a successful Ukraine. I believe this is possible. The energy I see in the new generation of Ukrainians gives me confidence in the future.

Jan Pieklo, former Polish Ambassador to Ukraine: During the past thirty years, Ukrainians have managed to build a solid basis for democratic statehood almost from scratch. They have developed a strong sense of national identity rooted in democracy that differs completely from the Soviet version imposed on Ukrainians during the Communist era and still promoted today by Russian President Vladimir Putin.

This process has not been easy. Ukrainians have faced numerous threats and challenges from the Kremlin, but they have demonstrated remarkable maturity and determination in defending their civilizational choice. The peaceful protests of the 2004 Orange Revolution were then followed by the 2013-14 Revolution of Dignity, which demonstrated to a stunned world that Ukrainians were ready to sacrifice their lives for freedom.

Despite the trauma and turbulence caused since 2014 by Russian aggression, Ukrainians have been able to successfully implement the country’s landmark Association Agreement with the European Union. They continue to make further progress towards integration into the Euro-Atlantic community.

Diane Francis, Nonresident Senior Fellow, Atlantic Council: Ukraine is an ancient nation and is also a young state with much to celebrate. The Ukrainian struggle to wrest itself from Soviet rule and overcome corruption has not been easy, but there have been major achievements.

Ukraine’s decision in 1991 to leave the Soviet Union was momentous and launched a long journey toward a fairer and more just society, but corruption and Russian influence continued. In 2004, the country’s civil society rose up and overturned a crooked election. Gains were made, but entrenched interests stalled progress. Then in 2014, the Revolution of Dignity overthrew Putin’s puppet President Viktor Yanukovych after he attempted to reject European integration and return Ukraine to the Russian sphere of influence.

Russia responded to Yanukovych’s ouster by invading, but Ukraine’s powerful civil society rose up once more and succeeded in preventing the full-blown partition of the country. United against a common foe, Ukrainians have since built a powerful military to defend against Russian aggression. At the same time, they have secured support from a strong alliance of international partners and continued to pursue domestic reforms.

The scale of Ukraine’s progress could be seen in 2019 when the country was able to stage highly competitive and open presidential and parliamentary elections despite wartime conditions. These elections produced landslide votes against corruption and in favor of further European integration. As Ukraine marks thirty years of independence, Russian threats continue to loom over the country, but Ukrainian resolve remains stronger than ever and is the country’s greatest asset.

Andy Hunder, President, American Chamber of Commerce in Ukraine: Ukraine’s most significant achievement over the last 30 years has been to stand up against foreign domination and despotic government. This has been achieved with dignity and with passion. The battle, however, is far from over. The leadership of Ukraine’s northern neighbor, unable to accept Ukraine as a free, sovereign, and prosperous nation, continues to fight against this independence.

Since 1991, modern educational institutions focused on a new generation of Ukrainians have been launched. The Ukrainian Catholic University is a fantastic example of twenty-first century education, community, and excellence.

The business community in Ukraine has witnessed tremendous changes over the last 30 years. I remember first encountering Soviet Ukraine in 1991 with empty shelves, a controlled economy, and no advertising. So much is now different. Today’s Ukraine offers risk but also plenty of opportunity.

I have spent most of my adult life in Ukraine and believe in the country’s future and in its wonderful people. I am delighted to be celebrating 30 years of Ukrainian independence in Kyiv. Slava Ukraini!

How modern Ukraine was made on Maidan

Since 1991, Ukraine’s two post-Soviet Maidan revolutions have helped define the country as an emerging democracy that seeks to escape from the orbit of authoritarian Russia and embrace Euro-Atlantic integration.

Image: A woman in downtown Odesa waves a Ukrainian flag in front of the city's iconic Duke de Richelieu monument, which is decorated in a traditional Ukrainian vyshyvanka embroidered shirt as part of the Black Sea port's preparations to celebrate Ukrainian Independence Day on August 24. (Konstantin Sazonchik/TASS via REUTERS)