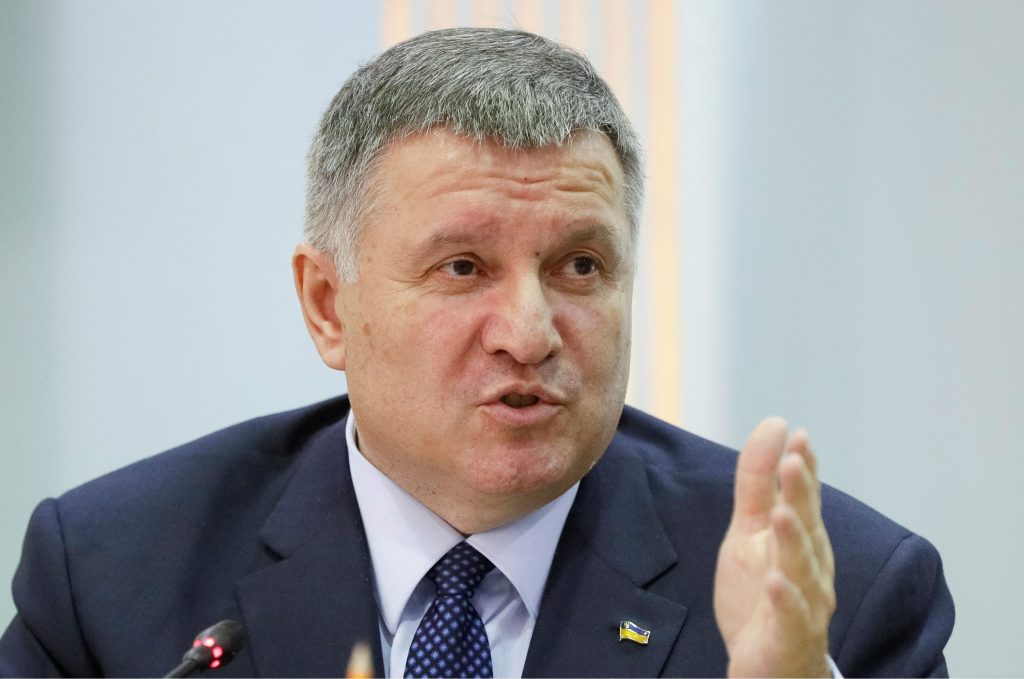 The G-7 wrote to Minister of Interior Arsen Avakov about the threat to Ukraine’s presidential election from the far-right National Corps political party and National Militia civic organization, both led by Andriy Biletsky with whom he has had a long relationship. The G-7 warned, “They intimidate Ukrainian citizens, try to usurp the role of the National Police in ensuring the security of elections, and damage the national and international reputation of the Ukrainian government.”

Many members of the National Corps and National Militia are veterans of the Azov regiment of the National Guard which comes under the Ministry of Interior. The US Congress has banned any US military assistance to Ukraine being used by Azov whose Wolfsange symbol has links to World War II SS units and the paramilitary Patriot Ukrainy (Ukrainian Patriot), an earlier version of National Militia.

Avakov and Biletskyy go back a long way. In 2004, Biletskyy split from Svoboda and created the neo-Nazi Social National Assembly (SNA), which is the precursor to the National Corps. In Kharkiv, SNA/Patriot Ukrainy acted as Avakov’s enforcers, street fighters, and business competitors to Kharkiv Mayor Hennadiy Kernes, a member of the Party of Regions. Kernes relied for the same range of activities on the even more vicious Oplot (Stronghold) extreme pro-Russian paramilitary group. Oplot fled in spring 2014 after they failed to create a separatist Kharkiv People’s Republic modeled on those Russia established in Donetsk and Luhansk.

The thin dividing line between Ukraine’s security forces and politics and civil society was the subject of Radio Free Europe/Radio Liberty’s flagship Skhemy (Schemes) program. The investigation analyzed how law enforcement, and in particular the Ministry of Interior, are not being neutral during the presidential election.

Schemes outlined how Avakov is playing his own election games supporting Yulia Tymoshenko. Meanwhile, the Security Service of Ukraine (SBU) and the General Prosecutor’s Office, which both constitutionally come under the president’s jurisdiction, are supporting incumbent Petro Poroshenko. The involvement of law enforcement bodies has led to competing election scandals: some accuse Tymoshenko of buying up voters, and other point to Poroshenko’s ties to corruption in the military.

Avakov is using the far-right in anti-Poroshenko protests and against the incumbent’s election campaign in the regions. The far right have threatened to use violence against those they caught undertaking election fraud. The Central Election Commission, which registered the National Militia as election observers, has lodged an official protest. The OSCE has itself expressed similar concerns about some election observers tied to political groups.

Tymoshenko contested the 2010 election results which were recognized by the OSCE, the United States, and EU and she could very well contest the upcoming election if she fails to enter the second round or is defeated in the second round. This could be problematic if the electoral difference between Tymoshenko and whoever defeated her was very small. Poroshenko has accused the National Militia and its political sponsors of being part of a broader Russian plan to destabilize Ukraine and undermine the election.

Why is Avakov playing these dangerous election games?

Avakov wants to stay in his job. Elected to parliament five years ago by the Popular Front (NF) party whose popularity has massively dropped, NF may not make it into the new parliament. This means Avakov will lose his position. One way to prevent this would be to support Tymoshenko’s election campaign in return for remaining minister of interior. Tymoshenko confirmed this when she replied positively after being asked whether Avakov would remain in his position if she won the election. Avakov’s ties to Tymoshenko are also long-standing; he led the Kharkiv regional branch of Tymoshenko’s Batkivshchina (Fatherland) party. Avakov was also Batkivshchyna’s candidate for mayor of Kharkiv in the 2010 local elections.

Avakov views the upcoming election as a threat to himself remaining in power. National Corps and National Militia are being used by Avakov to undermine Poroshenko’s election campaign through street violence and protests with the threat of disrupting the election process. Avakov is hoping to remain in government by helping to elect another candidate—Tymoshenko—with whom he worked for in Kharkiv.

These dangerous developments reflect two factors. First, they show that populists in Ukraine, just as in other countries, will stop at nothing in seeking power. Second, those politicians and law enforcement playing election games are placing their interests above those of Ukraine’s national interest by giving Russia opportunities to intervene.