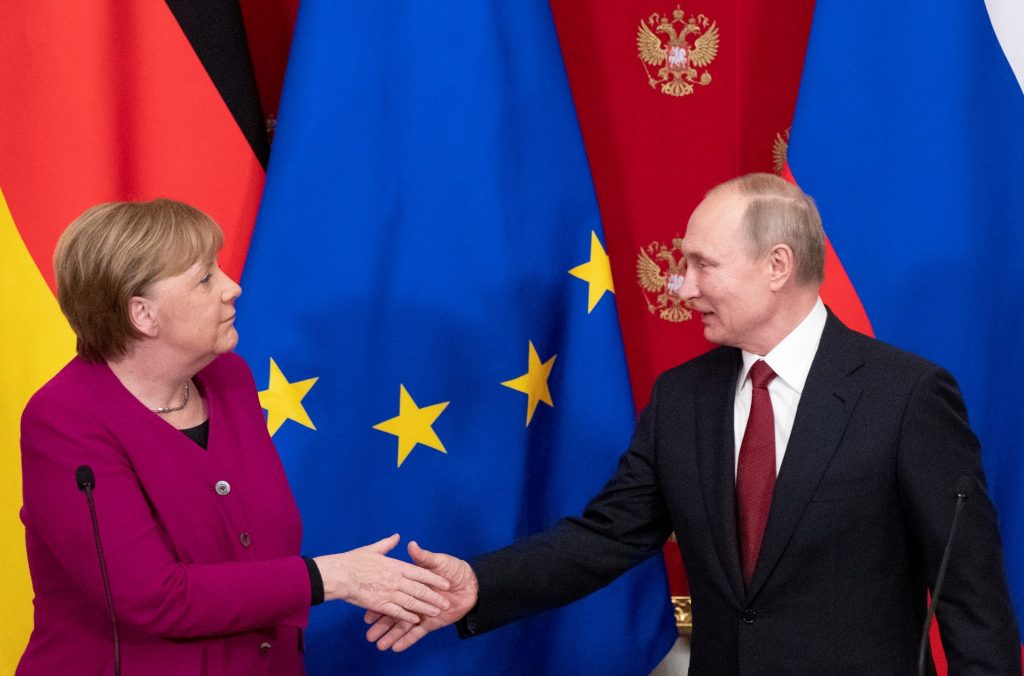 When Ukrainian President Volodymyr Zelenskyy meets German Chancellor Angela Merkel on 12 July, they will find plenty of common ground in their analysis of Russia. German-Russian ties have deteriorated sharply over the past year after Merkel offered medical treatment to the Russian opposition leader Alexei Navalny. Berlin’s revelation that he had been poisoned with novichok provoked a furious response from Moscow.

This occurred against a background of earlier cyberattacks on the German parliament along with the country’s foreign and defense ministries, and the murder of a fugitive Chechen in a Berlin park by an individual connected to Russian military intelligence.

Merkel had earlier demonstrated considerable courage in 2014 when she led the EU’s response to Russia’s annexation of Crimea and its establishment of separatist regimes in eastern Ukraine. Outraged by Moscow’s disregard for international law and its willingness to risk the wider destabilization of Europe, she built consensus both in Germany and the EU for sanctions against Russia.

This relatively uncompromising stance represented a dramatic shift in Germany’s policy towards Russia, which for years had remained in denial about the course that Russia was taking after Vladimir Putin came to power in 2000.

As a relatively young German-speaking Russian leader, Putin seduced German policymakers into believing that Russia saw its future in close cooperation with Europe based on common values and aspirations. The friendship between Putin and Gerhard Schroeder symbolized this new level of relations that German diplomats described as the best for 100 years.

In the early years of her chancellorship, Merkel largely stuck to the Russia policy of her predecessor, although she was not shy of meeting with opposition leaders and maintained a detached personal relationship from Putin himself, despite their frequent meetings and telephone calls.

Left largely alone by the Obama administration to manage the situation in Ukraine in 2014, Merkel was instrumental in initiating the Minsk peace process aimed at resolving the conflict in eastern Ukraine. However, the poorly drafted Minsk agreements led to predictably few results. Crucially, Berlin never officially challenged Moscow’s claim to be a facilitator of peace when it was, in fact, a party to the conflict.

Nevertheless, EU sanctions remained in place and much of German business resigned itself to the fact that political interests trumped economic gain in relations with Russia. From the early 1990s up to 2014, Germany consistently argued that the expansion of economic relations with Russia would contribute to modernizing its institutions and improving rule of law.

The reality was quite different. Russia developed its own brand of crony capitalism that strangled political and economic competition and relied on compliant prosecutors and judges to enforce its will. Instead of modernizing its institutions, it poured money into upgrading its army and security forces.

German policymakers were so lost in wishful thinking that they missed the warning signs in 2008 when Russia invaded Georgia and signaled that certain countries in its “privileged zone of interests” must keep their distance from NATO or face the consequences.

By 2013, as Ukrainian President Viktor Yanukovych toyed with signing an Association Agreement with the EU, it was clear that Moscow saw Ukraine’s closer alignment with Europe as intolerable. Despite Russia’s increasing pressure on Yanukovych, Germany closed its eyes and failed to intervene to defuse the growing crisis.

If the German political class today has fewer illusions about Russia, many of its reflexes have remained. The Nord Stream 2 gas pipeline is a monument to Germany’s undimmed desire to use economic relations as a tool to stabilize Europe’s ties with Moscow and to prevent Russia’s isolation. Although Merkel is believed to have privately hoped that the pipeline was in breach of EU competition law and would not go ahead, she has made no effort to stand in its way.

Merkel has belatedly accepted that Nord Stream 2 is not just a commercial project, and the German government is now trying to agree a formula with the US that will incentivize Russia to continue the transit of gas through Ukraine and limit the Kremlin’s ability to use the pipeline for geopolitical purposes.

Germany’s instincts towards Russia are shaped in large measure by the contradictory and violent history between the two countries in the twentieth century. Germany fears Russia but admires it at the same time. It senses that Europe is incomplete without Russia firmly anchored within it, but cannot reconcile itself to the fact that today’s version of Russia is not compatible with today’s Europe.

At the same time, Germany tries to avoid confrontation and struggles to resist aggressive Russian behavior. It cannot countenance supplying defensive weapons to Ukraine. Its historical narrative about “the east” gives little space to the Belarusian and Ukrainian lands, a reflection of its discomfort with the murderous devastation carried out there by Hitler’s armies. Instead, Germany transfers its sense of guilt about Nazi crimes inflicted on the peoples of the USSR exclusively to modern Russia. Its academic expertise on Belarus and Ukraine is strikingly underdeveloped compared to that on Russia.

With her East German background, Merkel has a clear understanding of Russia and is far from indifferent to Ukraine. For all her limitations, she has provided vital support to Kyiv since 2014. Her successor is unlikely to bring the same insight and confidence to dealing with Germany’s eastern neighborhood.

John Lough is an Associate Fellow with the Russia & Eurasia Programme at Chatham House. His new book Germany’s Russia Problem appears on 13 July.