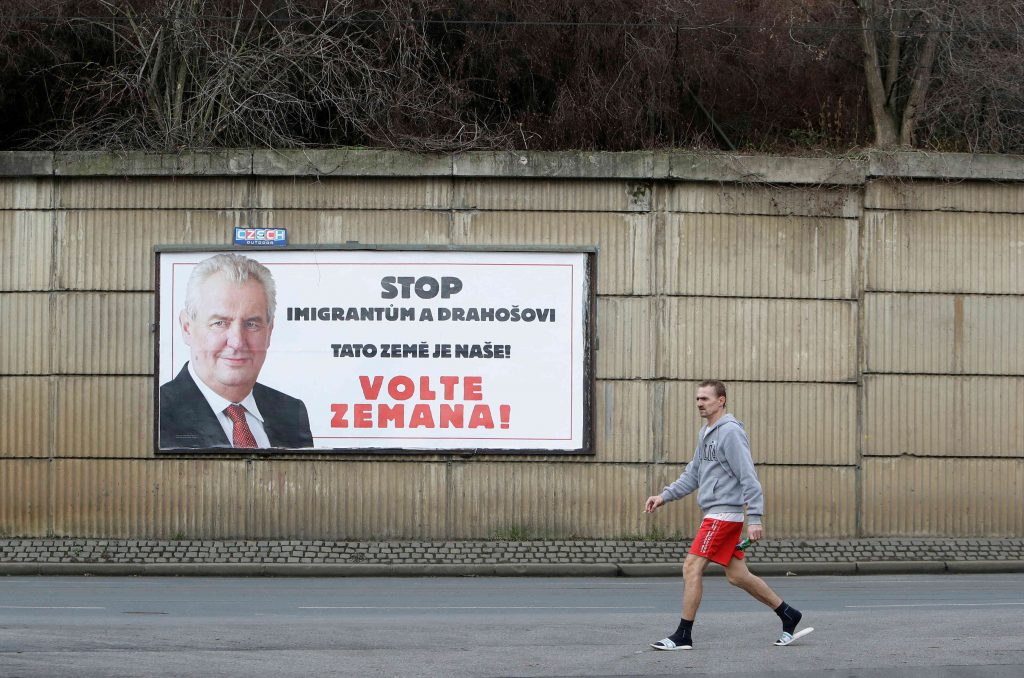 A man walks past a poster promoting the incumbent president Milos Zeman ahead of presidential election run-off in Prague, Czech Republic January 25, 2018. The poster reads: 'Stop migrants and Drahos. This is our land! Vote Zeman!'. REUTERS/David W Cerny

One day remains until the second round of the Czech presidential election, and polls show a tie with 10 percent of voters undecided. The race pits the current president, Miloš Zeman, against the former chairman of the Academy of Sciences, Jiří Drahoš.

New reports allege that there’s a hidden scheme to support pro-Russian president Zeman—at least 8 million Czech koruna has been provided by the secretive organization Friends of Miloš Zeman—in the tight race. The whole scheme is organized by Zeman’s chief adviser, who has direct Kremlin links.

Zeman is an anti-immigration populist who aims to win voters by supporting a referendum on the country’s continued membership in the EU and NATO, and by presenting himself as the only defender of the nation. He is well known for his vulgarity, and above all for his support of stronger ties between the Czech Republic and China and Russia. Jiří Drahoš, meanwhile, presents himself as an anti-populist candidate who intends to return dignity and a pro-Western orientation to the Prague Castle. He largely defines himself in opposition to Zeman.

For Russia, this is an important election. The Kremlin is determined to maintain its influence in the person of Zeman, despite his obvious poor health. Among all EU presidents, he is the Kremlin’s most important ally: he regularly repeats Kremlin narratives about the inefficiency and absurdity of anti-Russian sanctions, and surrounds himself with people who have strong personal and business ties with Russia.

In the Czech Republic, where the domestic intelligence agency BIS warns that Russian intelligence services are among the most active foreign intelligence services in the country, the infrastructure for information operations and disinformation campaigns has developed considerably in the last few years. It’s no surprise that disinformation efforts in the political, economic, and media spheres largely began around the start of the conflict in Ukraine. As in the West, Russia targets and undermines Czech democratic institutions, diminishing citizens’ confidence in traditional political parties and mainstream media, and disrupting Czech transatlantic partnerships and the legitimacy of its membership in international organizations such as the EU and NATO.

In particular, citizens using social networks are daily exposed to disinformation outlets, which ignore established journalistic ethics and standards. The result is usually a distorted reality in which Putin’s Russia is considered an island of stability and rationality. In Czech online space, nearly forty disinformation and manipulative sites can be accessed. And according to public polls, over a quarter of Czech citizens trust them more than traditional media outlets such as the public broadcaster Czech Television.

With the announcement that the first round’s results were favorable to Zeman—he won with 39 percent of the vote—disinformation about Drahoš began spreading on social networks. In response, a joint initiative of several NGOs called Popravdě.cz was launched by its spokesman Petr Nutil. Among others, analysts from the Prague-based European Values Think-Tank and the Prague Security Studies Institute participated in the initiative, which is dedicated to verifying news regarding the presidential campaign—mainly about Drahoš.

The initiative’s Facebook group had nearly two thousand members within a few days of its existence. Many of them are involved in tracking and debunking disinformation. The results of its activities are published on Facebook and on its website, which registered over 100,000 visitors in its first twenty-four hours.

The most common false information directed against Drahoš revolves around three topics: assertions that he supports unrestricted migration; his alleged cooperation with the Communist State Security StB, despite him having a clear lustration certificate; and his membership in the Club of Rome, which is depicted as an international Illuminati conspiracy. The Czech disinformation outlets are very active in presenting Drahoš as the flag bearer of globalization and transnational elites and as a threat to Czech sovereignty. Various unsubstantiated assertions are spreading rapidly, not only on websites but also through emails, including an open letter by the Byzantine Catholic Patriarchate that claims Drahoš represents the “system of death and evil.”

Even Zeman himself has become involved in the smear campaign against his opponent. For example, the Friends of Miloš Zeman association, which is headed by presidential chancellor Vratislav Mynář and adviser Martin Nejedlý, has published an advertisement in some newspapers and on billboards that reads, “Stop Immigrants and Drahoš. This Country Belongs to Us! Vote for Zeman!” However, it would not be the first time Zeman paved the road to victory with lies. In 2013, when he defeated former Foreign Minister Karel Schwarzenberg, the Supreme Administrative Court of the Czech Republic stated that Zeman had used a negative campaign against his rival that included falsehoods, but recognized the election as valid.

To return to the present, the role that disinformation plays could be decisive in a neck-and-neck race. Unfortunately we’ll probably only know how much impact it has after the elections.