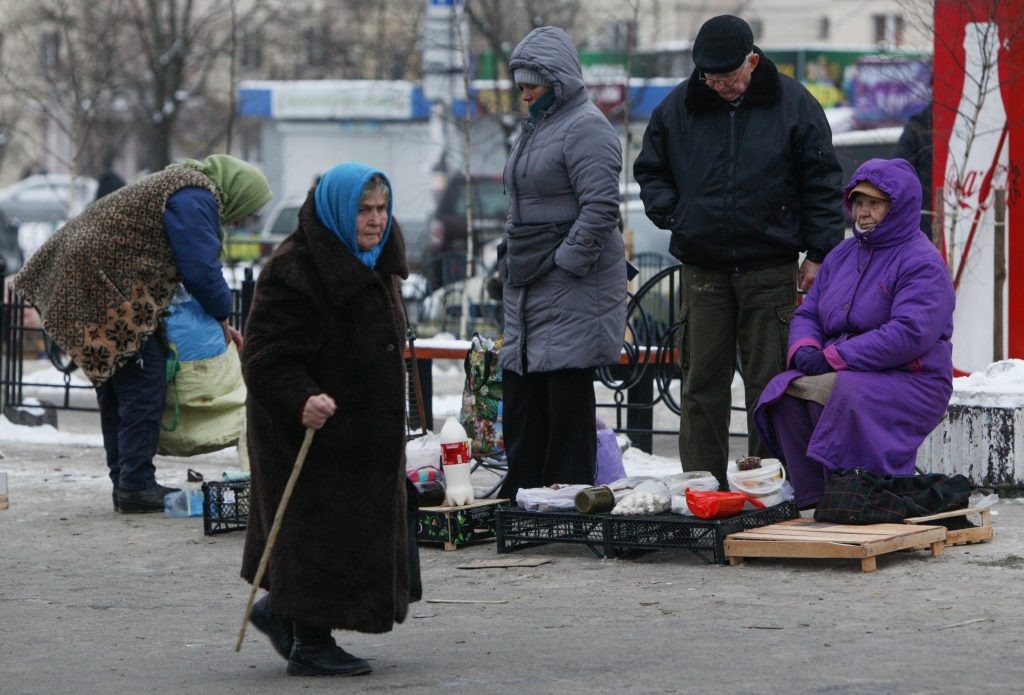 In Kyiv, elderly Ukrainians supplement their pensions by lining up on a frozen pavement last month to sell pickled vegetables, home-grown poultry and other homemade foods. (Reuters/Valentyn Ogirenko)

Ukraine’s finances are now “beyond life support,” says economist Tim Ash as its foreign reserves plunged to $7.5 billion last month, less than half of what the International Monetary Fund considers critical to a country’s financial health. The economy shriveled by 7.5 percent last year, electricity production is down in mid-winter, and the country needs immediate help to avoid an economic implosion.

Amid this, Ukrainians might be forgiven for thinking that their international allies seem to be standing with their eyes just slightly averted, patting their pockets distractedly as though in search of their misplaced wallets.

Economists such as Ash, a chief analyst in London for Standard Bank, say the slow pace with which the transatlantic community and the International Monetary Fund are working to gather a minimal new loan package for Ukraine is leading investors to pull capital out of the country. Ash this week echoed billionaire George Soros in urging the West to move faster and bigger in finding new loans: at least the $15 billion that economists say is a minimum to help the country’s transition to a more open economy and a cleaner system of government.

Soros: Why Not $50 Billion for Ukraine?

Soros declared last week that the European Union should rewrite some rules and tap a couple of its rainy-day funds for a “shock and awe” aid package of perhaps $50 billion. That would let Ukraine floor the accelerator on its reforms and would obliterate worries of a near-term collapse, letting investors confidently move into—rather than out of—Ukraine’s crusade to rebuild. If discussed by politicians as a “bailout,” the figure suggested by Soros seems big—a third the size of the 2010 financial rescue of Greece. But Ukraine’s successful conversion into a stable democracy is a security challenge—indeed, Europe’s biggest, according to many analysts. And as a security investment that would buttress Europe against Russia’s renewed and violent aggressiveness, $50 billion is pocket change. The NATO alliance spends that much on defense every eighteen days.

Ash agreed this week with Soros’ call for a big loan package to summon the powerful genie of market forces. “If the West stumps up a big number for new financing, it will likely not be needed, as the market will assume that the financing gap has been covered and … [the value of the Ukrainian hryvnia] secured,” he wrote in an e-mailed analysis. “Hence capital flight will halt, even reverse.”

An International Monetary Fund team is working this month in Kyiv to negotiate the terms for the IMF to release the next tranche of the $17 billion aid package it assembled last year. Only about $3 billion of this has been disbursed so far, says Ash, who is Standard Bank’s chief of research on emerging markets.

Ukraine is making real, but slow progress in raising that minimum of $15 billion that economists say will be needed this year, writes the Atlantic Council’s Kyiv-based senior fellow, Brian Mefford. Recent promises from the United States, Canada, and Germany cover about a third of that minimum, with more to be sought from other Europeans, Australia, Japan, and the IMF. Mefford says that he “puts the chance of Ukraine raising $15 billion in new money this year at 55 percent”—just better than even odds.

Europe needs to step back and look at what is really at stake for it in Ukraine, Soros wrote in an essay for the New York Review of Books last week. Of its two tools available for stabilizing a country critical to Europe’s own stability, Europe needs to maintain its sanctions on Russia (a negative for Europe’s own economy), while massively increasing its aid to Ukraine. That aid would provide a “much needed stimulus to the European economy by encouraging exports and investment in Ukraine,” Soros wrote, thus balancing the costs to Europe of the sanctions.

The aid Soros envisions will require decisions by political leaders, not bureaucrats, and Soros nominated German Chancellor Angela Merkel as “the key” leader who should get Europe acting on such an aid program within the first quarter of this year. “That would be a game-changer,” he wrote. “Ukraine would embark on radical reforms and, instead of hovering on the edge of bankruptcy, it would turn into a land of promise that would attract private investment.”

In his comment January 12, Ash noted that “the problem for the West is that it has taken months to get anywhere close to the $15 billion” seen as a survival-level loan package. “The message in the West’s slow response is that support is grudging, at best – hardly the convincing ‘blank check’ that markets want. The danger is that when the number is finally announced that it disappoints – and is picked apart by the market, and confidence eventually sags again, with capital flight remaining elevated. This could result in even more foreign financing being required further down the line.”

Budget battle. A measure of the work involved for Ukraine’s new government in qualifiying for continued IMF loans emerged in the December 29 parliament vote—at 4:24 a.m.—to approve the painfully austere state budget for 2015, Mefford notes. President Petro Poroshenko and Prime Minister Arseniy Yatsenyuk won 233 votes for the budget, which was shaped under IMF requirements for securing the international loans. That was seven votes more than the minimum, but far short of the 300-plus votes that their government coalition is supposed to command. The faction of billionaire oligarch Ihor Kolomoyskyi (a bloc called “Economic Development”) and another bloc of oligarch Ihor Yeremeyev were notable in opposing the budget, along with the party of former prime minister Yulia Tymoshenko, nominally a coalition member.