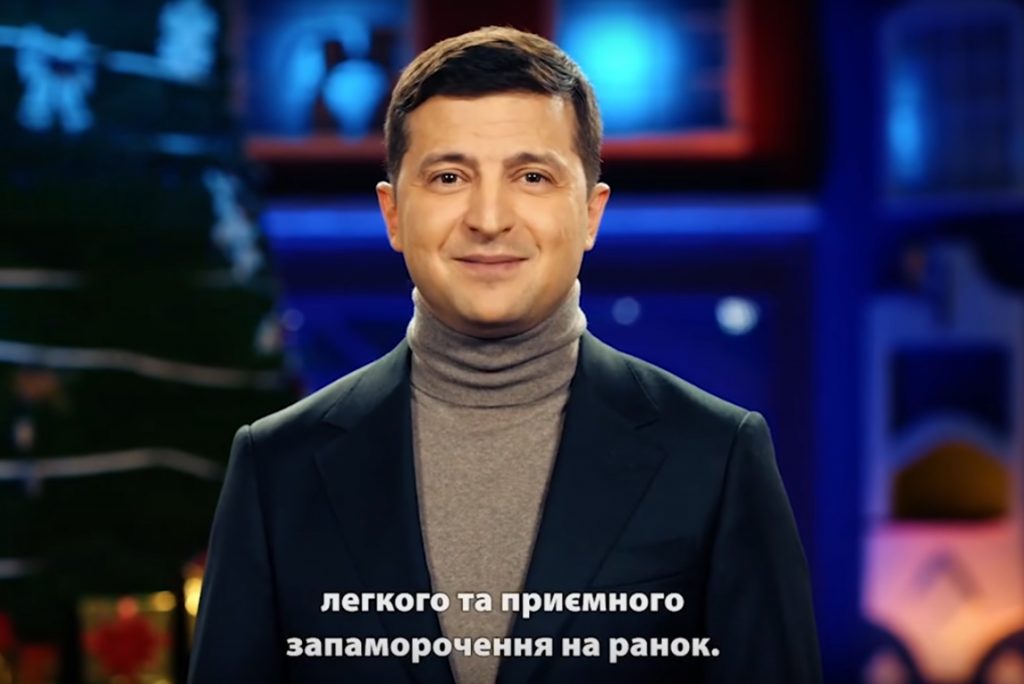 Ukrainian President Volodymyr Zelenskyy’s unconventional and nuanced New Year’s Eve address to the nation was one of the most significant speeches of his fledgling political career. He used the occasion to lay out his vision for an inclusive Ukrainian national identity transcending the barriers of language, ethnicity and memory that have so often served to divide Ukrainians since the country first gained independence in 1991. Zelenskyy’s main message was the need for national unity. He challenged his audience to reflect on what it means to be Ukrainian today. He invited them to focus on the things that unite rather than divide Ukrainians. In a country more accustomed to polarizing narratives of empire and occupation, this was something new.

Not everyone was convinced. Zelenskyy’s detractors seized on his efforts to downplay the symbolic importance of street names and monuments in order to portray him as indifferent or even hostile towards Ukrainian national values.  In reality, Zelensky was alluding to the need for tact regarding the pace of change in these sensitive spheres. He was attempting to articulate an approach to Ukrainian national identity that was both pragmatic and fundamentally European. His formula involved recognizing the country’s diversity and acknowledging its potential fragility, while at the same time placing the emphasis on shared experiences and common cultural reference points with the power to unite.

The speech sparked a highly animated public discussion, which is in itself an indication of its timeliness. While the extent of the negative reception should not be exaggerated, the tone of this criticism was a fair reflection of the political climate in Ukraine since Zelenskyy’s stunning presidential and parliamentary victories of spring and summer 2019.

Just over one year ago, as the presidential election drew closer, it became increasingly apparent that allegations of corruption and a failure to deliver on reforms could cost Ukraine’s incumbent president Petro Poroshenko his job. In response, Poroshenko built a campaign around increasingly crude appeals to patriotism rooted in language, religion and the military. His young rival Volodymyr Zelenskyy was depicted not only as unqualified to lead Ukraine, but as a tool of the Kremlin. This proved a grave miscalculation. Poroshenko lost the April ballot by a record margin as voters overwhelmingly backed Zelenskyy’s message of generational change, his emphasis on striving to end the war with Russia, and his promise of a more inclusive approach to the politics of national identity.

Poroshenko and his supporters still appear to be in denial about the nature and significance of this election defeat. Instead of recognizing the result as a nod to the pluralism of Ukrainian society, many in the former president’s camp have chosen to dismiss three-quarters of the electorate as unpatriotic and ignorant dupes who have supposedly been manipulated by Zelenskyy and the enemies of Ukraine. Since losing office, Poroshenko has encouraged division rather than unity. This has included deliberate attempts to foster the impression that he remains the nation’s true leader, as illustrated by the decision to air a rival New Year’s Eve address on the two national TV channels he controls.

The main purpose of Zelenskyy’s New Year speech was to counter this by appealing for greater tolerance and understanding. It was a call for the consolidation of an inclusive political nation. For this to happen, Zelenskyy stressed the need for patience and goodwill. This is particularly true, he implied, on issues of language and historical memory. Critics saw this as an attack on the processes of Ukrainianization and de-communization that have dominated the national identity debate since the country’s 2014 Revolution of Dignity and the onset of Russian aggression. In fact, the Ukrainian president was implicitly challenging the country’s “patriotic” opinion-makers to emerge from their comfort zone and engage in the complex state-building task that lies before today’s Ukraine. In doing so, he did not shy from bringing fundamental questions to the fore about the evolving nature of modern Ukrainian national identity.

The historic events of the past six years have challenged traditional notions of what it means to be Ukrainian. Huge numbers of Russian-speaking Ukrainians and ethnic Russian Ukrainians have demonstrated their loyalty to Ukraine, first on Maidan and then in the war with Russia. There are countless individual examples to illustrate this point. The country’s latest symbol of national heroism, the filmmaker Oleg Sentsov, is both an ethnic Russian and a Ukrainian patriot who refused to bow to the Kremlin despite years spent in Russian captivity.

In the cultural sector, Crimean Tatar Jamala famously won the 2016 Eurovision Song Contest for Ukraine, while the country’s most successful literary export is ethnic Russian Andrei Kurkov. In politics, a number of Jewish Ukrainians including Zelenskyy himself have assumed positions at the helm of the Ukrainian state. Meanwhile, Kyiv remains both the proudly Ukrainian capital of national life and the largest Russian-speaking city in the world outside of Russia itself. With this in mind, is being Ukrainian still primarily about speaking the Ukrainian language, belonging to a particular religion, or accepting the traditional Ukrainian historical narrative? Or is it now defined by loyalty to the Ukrainian state?

Zelenskyy’s New Year address was a bold move at a time of acute sensitivity towards issues of Ukrainian national identity. It resonated loudly with millions of the voters who brought him to power, while antagonizing those already suspicious of his moderation in light of the existential Russian threat facing the country. Supporters of Zelenskyy’s inclusive vision see it as a pragmatic approach to the political, cultural, historical and linguistic complexities of the country. They argue that Ukrainians must update their understanding of national identity if they wish to create a viable modern state. This means adapting nineteenth century notions of nation-building and statehood to twenty-first century realities.