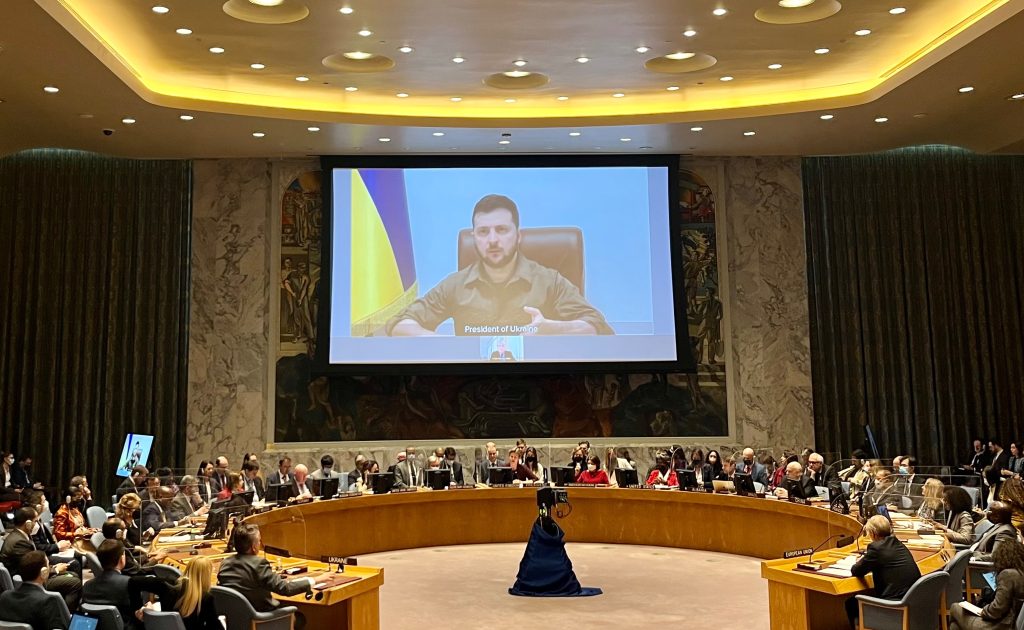 Ukrainian President Volodymyr Zelenskyy has called for the wholesale reform of the United Nations in an emotional address to the UN Security Council marked by scathing criticism of its response to Vladimir Putin’s invasion of Ukraine.

Speaking to the UNSC via video link on April 5, Zelenskyy said the ongoing Russian war against Ukraine had made it “obvious” that the United Nations in its present form is unable to serve its primary purpose of preventing international aggression. “Ladies and gentlemen, are you ready to close the UN and admit the time of international law is gone? If your answer is no, then you need to act immediately.”

Zelenskyy’s comments reflect widespread Ukrainian frustration over the perceived failure of institutional institutions to meet the challenge of Putin’s invasion. This criticism is by no means limited to the United Nations itself.

The Organization for Security and Co-operation in Europe (OSCE), whose mission is to promote peace and stability, evacuated its special monitoring mission from eastern Ukraine on the first day of the war, passing up the opportunity to monitor the invasion.

Meanwhile, NATO has made it clear that it will not impose a No-Fly Zone over Ukraine or otherwise intervene in the conflict. While individual NATO member states have provided Ukraine with arms, the alliance has repeatedly ruled out any involvement. During a recent extraordinary NATO summit in Brussels, alliance members chose to focus attention on defending NATO’s eastern flank rather than enhancing Ukraine’s ability to defend itself.

The war has also exposed the limitations of the United Nations nuclear watchdog, the International Atomic Energy Agency. IAEA officials were unable to influence developments in Ukraine despite a dangerous loss of power at the Chornobyl site and damage to Ukraine’s largest nuclear plant in Zaporizhia caused by a Russian military assault. This was the first time in history that one IAEA member attacked the nuclear facilities of another, but the watchdog proved powerless to act.

Ukrainians have been particularly disappointed by the role of the Red Cross (ICRC), which has been criticized for failing to organize humanitarian corridors and for prohibiting the use of its emblems on vehicles during evacuations of Ukrainian civilians.

There has been considerable disquiet in Kyiv over ICRC president Peter Maurer’s decision to visit Moscow and meet with Russian Foreign Minister Sergei Lavrov. This trip resulted in an agreement to open a new office in Rostov-on-Don, a step which many in Ukraine fear will be used to help legitimize the forced deportation of Ukrainian civilians from the conflict zone to Russia.

Criticism of the UN has largely focused on the ineffectiveness of the United Nations Security Council, with permanent UNSC member Russia using its veto power to block any measures designed to stop the war. This farcical situation has fuelled renewed calls for changes to prevent UNSC members abusing their position in order to wage wars of aggression. Without fundamental reform of the Security Council, United Nations General Assembly votes serve little purpose other than to assess the geopolitical mood and identify Russia’s remaining international supporters.

Ukrainians have paid a high price for the toothless response of international institutions to Putin’s invasion. Thousands have lost their lives while more than ten million have been forced to flee their homes. Entire Ukrainian cities now lie in ruins, while Russian atrocities committed against the civilian population during the first month of the war have traumatized the Ukrainian nation and sent shock waves around the world.

It is important to acknowledge that the international community has done much since the outbreak of hostilities to help Ukraine. First and foremost, Ukraine’s partners have provided vital military aid that has helped the Ukrainian Armed Forces defend their country and inflict punishing losses on Putin’s invasion force. Unprecedented sanctions measures have also been imposed on Russia, while countries across Europe have demonstrated remarkable hospitality in welcoming Ukrainian refugees.

Unfortunately, these measures are not enough. The war unleashed by Putin on February 24 represents a moment of reckoning for the world’s key international institutions that underscores the urgent need for fundamental reform. The unforgiving spotlight of the current crisis has exposed them as increasingly obsolete and overly bureaucratic organizations that are no longer capable of performing their core functions.

There are obvious parallels here with the experience of the early twentieth century League of Nations. Founded in the aftermath of World War I, the League of Nations was undermined by its inability to prevent the march towards World War II and ultimately fell victim to a conflict it could not prevent. We may now be approaching a similar moment.

The Russian invasion of Ukraine has highlighted the obvious shortcomings of today’s international institutions and demonstrated the need for a complete rethink of the institutional infrastructure governing world affairs. This will require a combination of leadership and vision that is currently lacking. Ukrainians are ready to play their part in this process, but they also expect much more from the international community.

Oleksii Riabchyn is an advisor to the CEO of Naftogaz and advisor to Ukraine’s Deputy Prime Minister for European and Euro-Atlantic Integration. He previously served as a Ukrainian MP and deputy energy and environmental protection minister. Daryna Kulaga contributed to this article.