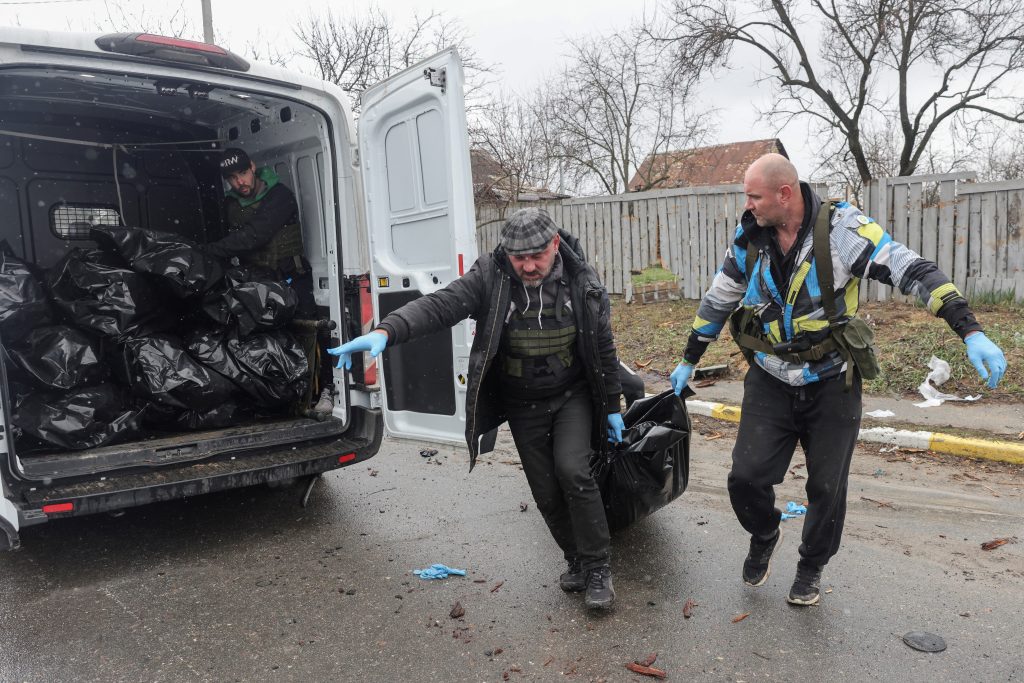 As Ukraine continues to liberate areas north of Kyiv, global audiences are being confronted by shocking photo and video evidence of crimes against humanity. Weeks spent under Russian occupation have transformed the once sleepy suburbs of the Ukrainian capital into a vast killing field. It is becoming increasingly apparent that Putin’s invasion force has committed war crimes that echo the worst excesses of the totalitarian twentieth century.

These are not isolated incidents or random acts of savagery. On the contrary, they reveal the genocidal intent at the heart of Putin’s Ukraine War. In towns and villages across the region, Ukrainian troops are encountering strikingly similar scenes of bestial carnage that point to a premeditated plan of extermination. Dead bodies lie strewn throughout the streets, many with their hands bound. Victims are buried in mass graves or stacked up in basements. Highways are littered with burned out cars and charred human remains.

The atrocities uncovered close to Kyiv offer a grim hint of what may be taking place elsewhere in Ukraine in regions currently under Russian occupation. We already know that Putin’s army has targeted the civilian population in a campaign of indiscriminate artillery and aerial bombardment that has reduced entire towns and cities to rubble and left thousands dead. Those who survive the onslaught face the prospect of forced deportation to Russia and an uncertain future in exile.

Meanwhile, accounts of sexual violence and torture in occupied parts of Ukraine have become depressingly routine. In towns controlled by Russia, Putin’s troops are systematically rounding up local officials, journalists, activists, and community leaders in Stalinist-style sweeps designed to decapitate any potential Ukrainian resistance. When targets succeed in evading capture, relatives are seized as hostages. Many of these abductees have reportedly been executed, but the true death roll cannot be clarified until Ukrainian control is reestablished.

The scale of Russia’s crimes in Ukraine is sadly not surprising. For the past eight years, the Putin regime has been indoctrinating the Russian people with a relentless stream of propaganda designed to demonize and dehumanize Ukrainians. Throughout this period, the Kremlin-controlled Russian media has consistently portrayed Ukrainians as treacherous lackeys of Western imperialism and rabid nationalists driven by irrational russophobia.

Meanwhile, Putin himself has repeatedly questioned Ukraine’s right to exist while frequently asserting that Ukrainians are merely misguided Russians who have been led astray and artificially separated from their motherland. Putin spelled out his denial of Ukrainian identity in a lengthy July 2021 essay that accused modern Ukraine of occupying historically Russian lands while bizarrely asserting that Ukrainian sovereignty could only be possible in partnership with Russia.

The Russian ruler’s personal fixation with Ukraine has intensified throughout his reign and reflects his burning resentment over the perceived injustices of the Soviet collapse. Putin regards the breakup of the USSR as the “demise of historical Russia” and views the subsequent spread of democracy as a Western plot against his country. The post-Soviet emergence of an independent and democratic Ukraine has come to embody these twin obsessions.

In a series of alarmingly unhinged addresses delivered at the time of his February invasion, Putin branded Ukraine an “anti-Russia” led by “neo-Nazis” and vowed to “de-Nazify” the country. Given that Ukraine is a democracy with a popularly elected Jewish president and a far-right fringe that consistently fails to secure more than 2% of the vote, these Nazi claims are self-evidently ludicrous. Nevertheless, Putin’s baseless assertions are readily accepted by tens of millions of Russians living within the Kremlin propaganda bubble.

This fabricated “Nazi Ukraine” narrative plays a crucial role in driving popular support for the war while increasing Russian public tolerance for atrocities. Despite widespread awareness of the destruction taking place in Ukraine, ordinary Russians overwhelming back the invasion. A recent survey conducted by Russia’s most credible independent pollster, the Levada Center, found that Putin’s approval rating had actually increased by 12% to a four-year high of 83% following the outbreak of hostilities with Ukraine.

We are now witnessing chilling confirmation of Voltaire’s famous warning that those who can make you believe absurdities can also make you commit atrocities. Russian soldiers taught to deny Ukraine’s very existence and encouraged to regard all Ukrainians as Nazis are engaging in a campaign of coordinated war crimes that threatens to cross the threshold into genocide. Their twisted definition of a “Nazi” has come to include any Ukrainian who does not agree with them and has turned more than 40 million Ukrainians into legitimate targets.

Details of Russia’s recent war crimes in the Kyiv region have provoked widespread international outrage. European Council President Charles Michel expressed his shock at the “haunting images of atrocities committed by the Russian army” and promised that further EU sanctions and support are on the way. In an April 3 statement, British Foreign Secretary Liz Truss vowed, “We will not rest until those responsible for atrocities, including military commanders and individuals in the Putin regime, have faced justice.”

While talk of holding Russia legally accountable is welcome, the current priority must be to protect the Ukrainian population from further crimes against humanity. This can only be achieved by urgently and dramatically expanding arms shipments to Ukraine.

Western military aid has already had a major impact on the conflict but most the weapons delivered to Ukraine thus far have been suited to an insurgency, whereas Kyiv now needs to win a conventional war. This will require more tanks, artillery, jets, helicopters, missile systems, and ammunition as well as ample additional stocks of the anti-tank and anti-aircraft weapons that have already proven so effective against Putin’s invading army.

Increasing arms deliveries to Ukraine will require considerable political courage. For months, Western leaders have hesitated over the supply of offensive weapons to Ukraine for fear of provoking Putin. However, as Russian atrocities escalate, this caution must be weighed against the far greater danger of an unfolding genocide in the heart of Europe. Urgent military action is now clearly necessary to prevent what could otherwise soon become one of the gravest crimes against humanity since the days of Hitler and Stalin.

If Ukraine is provided with the necessary weapons without delay, the chances of a positive outcome are strong. Ukrainian troops have already demonstrated their ability to beat Russia on the battlefield and are highly motivated to defend their homes. They recognize that their country’s very existence depends on their ability to defeat Putin and are acutely aware of the fate that will await them and their loved ones if they should fail. Western leaders must now give them the tools to finish the job.

Image: Volunteers carry the body of a civilian killed by Russian soldiers to a van in Bucha containing the bodies of more victims. April 3, 2022. (REUTERS/Stringer)