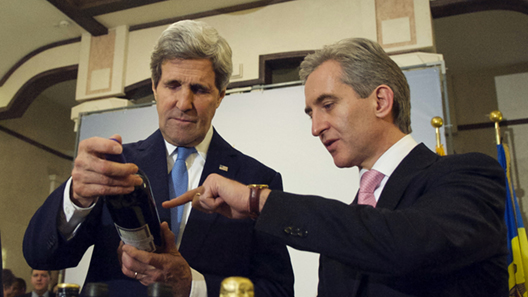 As a Small Nation Faces Russian Pressure, Europe’s Future is on the Line

Moldovan Prime Minister Iurie Leancă’s meetings at the White House today are a crucial sign of US support for his leadership and for Moldova’s Euro-Atlantic future, especially alongside Russia’s invasion of Moldova’s neighbor, Ukraine. In November, Moldova, alongside Georgia, signed a European Union (EU) Association Agreement, a step toward what Moldovans hope will be their country’s eventual membership in the EU. Russia’s occupation of Crimea is a blunt reminder of the high price – territorial dismemberment – that President Vladimir Putin is extracting for these countries’ desire to be part of a Europe that is whole, free, and at peace. Leancă is taking a real political risk by adhering to his people’s wishes despite Russia’s coercion.

For Moldova’s Euro-Atlantic project to succeed, Leancă needs to show that Moldova’s democratization process is irreversible, and the US and its European allies must unequivocally commit themselves to rewarding this progress. The stakes go far beyond the fate of Moldova. The future of Europe is on the line. If Moldova follows a course of reform, backed by the West, it can become fully integrated into European institutions, and relations with Russia can be normalized, as they have been in the Baltic states of Lithuania, Latvia, and Estonia. Moldova then can be a model for Ukraine and others. But if Moldovan reforms are reversed – or a divided West fails to impose sufficiently serious diplomatic and economic costs upon Russia for violating the sovereignty of its neighbors – Europe will enter a new era of division.

At home, Moldova needs to strengthen its democratic foundations. In the words of Stefan Fule, the EU commissioner for enlargement and the European Neighborhood Policy, “The root causes of political instability remain to be addressed. … Constitutional reform, deep judicial reform, the fight against corruption and improvement of the business climate are of the essence; they cannot wait any longer.” These steps are needed to let Moldova meet EU standards of democracy and transparency, and to avoid the serial crises that have defined the country’s elections. Leancă has shown courage in pushing this reform agenda. He speaks frankly about corruption, recognizing its corrosive effect on Moldova’s democracy and its EU ambitions. The EU and the United States will support him as he translates this commitment into action.

The United States and Europe, for their part, must be realistic and decisive in confronting Russia’s well-honed use of economic blackmail, secessionist conflicts, and military invasion to block its neighbors’ Euro-Atlantic course. In Moldova, as in Ukraine and Georgia, Russia has troubled itself with neither civility or nuance. In a visit to Chisinau last September, Russian Deputy Prime Minister Dmitri Rogozin warned his hosts that their choice of a European future for their country would be “a grave mistake.” He threatened to cut off Russia’s supply of gas to Moldova, saying “The cold season is near. … We hope that you will not freeze.”

That crude threat is the Kremlin’s pattern. It has used Russia’s abundance of natural resources to politically strong-arm its economically struggling neighbors, altering its gas price to sustain pliant governments or punish resistant ones.

Russia has destabilized Moldova (as it has Georgia and now Ukraine) by fuelling secessionist movements. Left to the local populations, the secession of Transnistria – the eastern-most edge of Moldova, could have been solved long ago. The Russian-speaking Moldovans, Ukrainians, and Russians in Transnistria for years have interacted heavily with their counterparts on the other side of the River Dniestr. Moldova has made serious concessions, including allowing Transnistria access to Moldova’s European market and proposing broad autonomy for the region. But more than a thousand Russian troops remain in Trasnistria in spite of the fact that there is zero threat to the people there. Russia may also seek to put pressure on Chisinau through Gagauzia, an autonomous region home to mostly Turkic-speaking Orthodox Christians. Gagauzia last month held an illegal referendum that overwhelmingly rejected Moldova’s development of closer ties with the EU and instead supported it moving toward the Russia-dominated Customs Union. In both Transnistria and Gagauzia, despite, more than two decades of Moldovan independence, Russia plays on fears that closer European integration would somehow result in the unification of Moldova and Romania.

For Moldova to become an undivided, European state, it needs a lot of help from the United States and its European allies. Today’s talks with President Obama, Vice President Biden and Secretary of State Kerry are a good start. They need to be followed up and these interactions institutionalized. US advice and help in the areas of security, trade and energy, and judicial reform can make a real difference to keeping Moldova on track and Russia at bay. Moldova’s military, intelligence, and police forces would benefit from a closer relationship with their US counterparts, including training, information sharing and technical assistance. Now is also the time to create a Strategic Partnership Council with Moldova to parallel the structures the United States has with Ukraine and Georgia, and to emphasize support and common vision for all three countries.

The repeal of the Jackson-Vanik Amendment in 2012, imposed during the Cold War to protest Soviet restrictions on emigration and violations of human rights, was an important step for developing normal US trade relations with Moldova. Now the United States should make clear that Moldova, once it concludes an association agreement with the EU, can join the Transatlantic Trade and Investment Partnership. But Moldova also needs both short-term and long-term help to lessen its dependence on Russia’s energy supplies. Moldovans shouldn’t be forced into a false choice between heating their homes in winter or obtaining greater trade, travel, and educational opportunities with their European neighbors. Carlos Pascual, the Start Department’s special envoy and coordinator for international energy affairs, who has vast experience on Eurasia, should be dispatched to Chisinau to develop a strategy with the European Union to help Moldova diversify its energy suppliers, improve energy efficiency, and develop a local renewable energy industry.

Finally, the United States and the EU need to consider new approaches to Transnistria. The “5+2 Talks” (including Transnistria, Moldova, Ukraine, Russia, and Organization for Security and Cooperation in Europe, or OSCE – plus the United States and the EU as observers) have let Russia pretend to the role of peace-broker while it undermined all genuine attempts to resolve the conflict. Moldova has long sought greater EU and US involvement on the conflict and now is the time consider innovative ways to provide that. Today, Russia is undermining European security and refusing to cooperate with its neighbors on any terms but its own, making a mockery of OSCE’s founding principles and Russia’s commitments to the organization. On Transnistria, it is time to look to existing or new forums in which the United States and the European Union are full players, not observers, where they can contribute their vast experience in conflict resolution, offer substantial political and economic incentives for both parties to reach a deal, and strengthen people-to-people interactions not just between Moldovans but with their European and American counterparts. The objective should be to demilitarize Transnistria, replacing all armed factions with OSCE international observers.

Prime Minister Leancă’s visit to the United States comes at a dark time for Europe’s East. But the United States and its European allies have a chance to show the Kremlin that its aggression in Crimea will carry a heavy diplomatic and economic price for Russia and its standing in the world. They can demonstrate that Europe’s West stands unequivocally with the democratic aspirations of Europe’s East. This means that the West must do much more than condemn Russia and react to the events in Crimea. A core part of the needed transatlantic response is to help reformers like Moldova succeed and integrate with Europe. The United States and its European partners must help Moldova strengthen its democratic institutions, bolster its economy, and find new ways to achieve reconciliation among its own people so that Moldovans can achieve their aspirations to be part of Europe whole, free, and at peace.