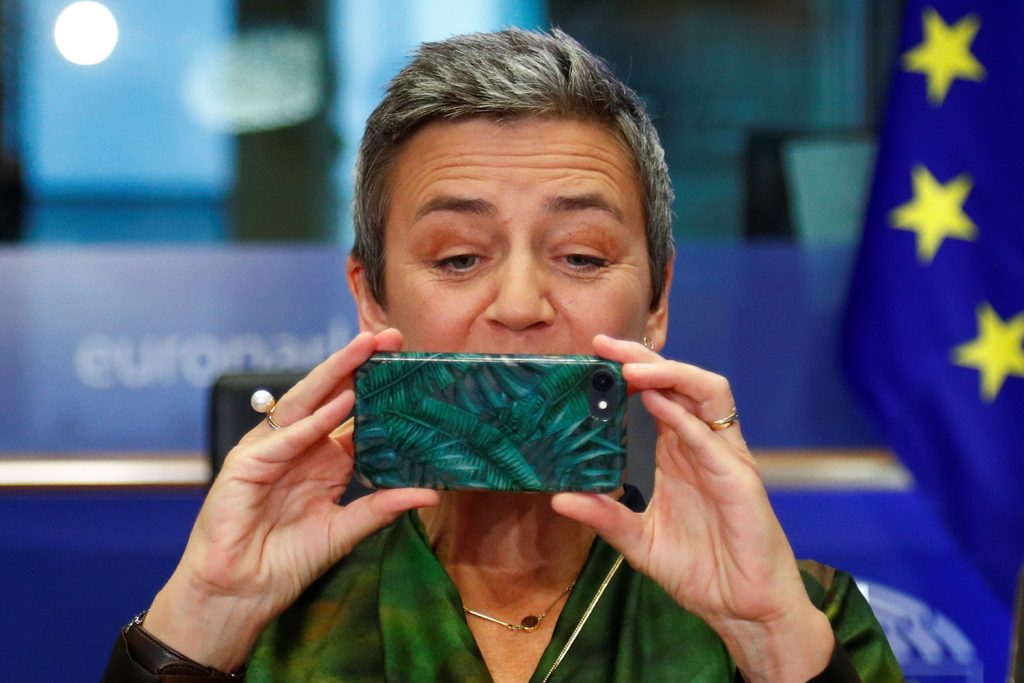 With the new European Commission now in place, it is clear that the European Union (EU) will be very active in addressing key digital policy issues over the next few years. Just as the EU sought to address concerns about online privacy through the adoption of the General Data Protection Regulation (GDPR), the EU is now likely to develop new legislation on artificial intelligence, e-commerce, platform liability, digital taxation, competition, and other issues. The new Commission, led by President Ursula von der Leyen, has clearly identified creating a “Europe fit for the digital age” as one of two major priorities—the other being climate change. In her political guidelines, then President-elect von der Leyen called for Europe to grasp “the opportunities from the digital age within safe and ethical boundaries… we have to find our European way, balancing the flow and wide use of data while preserving high privacy, security, safety, and ethical standards.” She embraced both a significant investment in new technologies and innovation, but also a focus on regulatory initiatives that aim to protect European citizens and build European leadership in the digital economy.

This focus on digital policy is embedded in a new economic strategy that represents a return to thinking in traditional European terms about an industrial strategy, one that would ensure that European companies face a “level-playing field” on their own continent but that also makes room for innovative European start-ups. This is coupled with a new emphasis on economic, and specifically, technological sovereignty, so as to ensure that the European economy is not vulnerable to the regulatory, investment, or trade whims of other governments. The new focus is motivated in part by concerns over the implications of Chinese investment—including in European 5G—as well as the impact of US tariffs and the dominance of US tech corporations. The shift has gained traction in EU policy circles quickly, including among the leadership. It is far from clear what this will mean for US companies and other non-EU entities that have become major players in the European digital market.

Making Europe fit for the digital age will involve a wide range of policy initiatives. Already, von der Leyen has:

As with the GDPR, it is clear that the ambitions of the Commission are not limited to the European market. Instead, as the EU develops standards in the areas listed above, it will encourage other countries and regions to adopt those measures or similar ones. Given the size of the European market, its powers of persuasion could be considerable. Many US companies have already adopted GDPR in order to have access to the EU market, and the development of EU standards on other issues would probably lead to a similar result. Of course, a Commission proposal does not make an initiative into European law. But the European Parliament seems, if anything, more eager to legislate in these areas than the Commission, and has often been more critical of US firms and US government policy. The Council, representing the member states, will undoubtedly see a rise in governments favoring industrial policy-type initiatives, especially with the absence of the more free-market-oriented British.

Von der Leyen has constructed an experienced and formidable team of commissioners to lead the digital agenda. The lead is Executive Vice President Margrethe Vestager, who also retains oversight of the Commission Department (DG) Competition. With this appointment, she has expanded her remit across all of digital policy, building on five years of investigating digital companies—as well as many others—while serving as the commissioner for competition policy and imposing a combined total of $20 billion in fines on Apple, Google, and others during the previous Commission’s mandate. Vice President Vera Jourova, who heads the workstream for Values and Transparency, can be expected to continue her work on privacy and illegal content that she developed during the previous Commission as commissioner for justice, consumers, and gender equality. Didier Reynders, who reports to Jourova as commissioner for justice, will undoubtedly focus on cybersecurity, e-evidence, and other related topics. Mariya Gabriel, the former Commissioner for Digital Economy and Society, has become the Commissioner for innovation, research, culture, education, and youth; the first two—innovation and research—will undoubtedly make her a player in the recast digital agenda, although she will be more focused on supporting research than devising policy.  Perhaps another key player—in addition to Vestager—will be the new Commissioner for Internal Market Thierry Breton, who has oversight of the DGs for communications, technology, and the Internet (DG CONNECT), for the Internal Market (DG GROW), and the new DG Defense Industry and Space. Each of these portfolios has a digital element, while DG CONNECT leads the project to create an EU Digital Single Market. The former CEO of French telecoms and internet companies, Breton has significant experience in business but can be expected to support strong European regulation—coupled with an industrial policy favoring European champions—in all of these areas.

With a strong team now in place, the von der Leyen Commission can soon be expected to launch its program to make the EU a significant digital power. Whether the EU will succeed is unclear, there are many obstacles to their success, including the lack of venture capital for start-ups and a regulatory-heavy culture. But there is little doubt that the discussion about regulations and standards in the digital economy will be dominated by European ideas and proposals, both good and bad. Unless they engage, US policymakers risk being forced to react to ambitious pieces of legislation that, like GDPR, have a real impact on US business and the domestic debate on these issues.

Image: European Commissioner-designate for Europe Fit for Digital Age Margrethe Vestager of Denmark takes a picture ahead of her hearing before the European Parliament in Brussels, Belgium October 8, 2019. REUTERS/Francois Lenoir