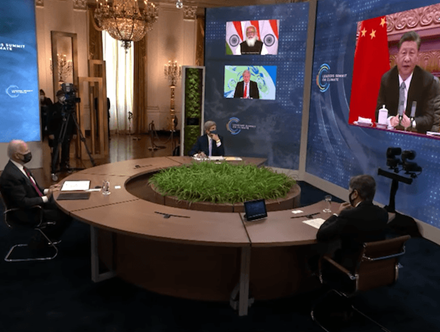 Biden’s Climate Summit. Forty world leaders, including Chinese President Xi Jinping and Russian President Vladimir Putin, participated in a global climate summit convened virtually by President Joe Biden in late April. The United States, the EU, Japan, and several other nations committed to significant reductions in greenhouse gas emissions by 2030, but many other major emitters, including India, Indonesia, and Australia, did not make any significant new commitments.

India’s COVID Crisis. India became the epicenter of the coronavirus pandemic, as a highly contagious variant triggered a catastrophic new wave, leading to severe oxygen shortages and India’s highest death rate since the pandemic began. While the US, Britain, and other nations began to ship needed medical supplies, including oxygen, therapeutics, and vaccines to India, the escalating rate of infection has overwhelmed India’s struggling health care system.

US Afghan Pullout. President Biden announced that the US will withdraw all remaining troops from Afghanistan by September 11, the 20th anniversary of the 9/11 attacks. The withdrawal of NATO troops, currently at 9,600 (including 2,500 Americans) will soon follow, amid ongoing peace talks between the Taliban and the Afghan government. The US will continue to provide security assistance and advice to the Afghan government.

“I’m encouraged to see so many countries coming together today to fight climate change. It’s the only way to overcome the challenges people face in every part of the world. That’s why it’s also vital that we all work together to strengthen respect for international law [and] reaffirm our collective commitment to human rights…Our collective success depends on finding a better path, not only to a more sustainable future, but to shared peace and prosperity for everyone.”