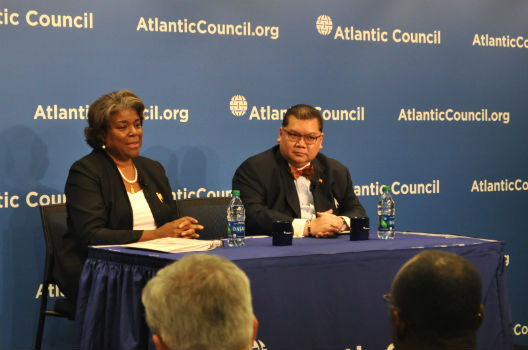 On Thursday, March 9, the Atlantic Council’s Africa Center hosted a public address by Assistant Secretary of State for African Affairs the Honorable Linda Thomas-Greenfield on the future of US and global relations with Africa.

Atlantic Council Vice President and Africa Center Director Dr. J. Peter Pham welcomed participants and introduced Thomas-Greenfield, who will leave her post at the head of the State Department’s Bureau of African Affairs on March 10 after a thirty-five-year career in the US Foreign Service.


Thomas-Greenfield opened by noting the great progress she has witnessed since she began her career in Liberia—where she was also ambassador from 2008 to 2012—nearly four decades ago. She remarked on the progress made by countries like Ghana and Nigeria, which emerged from military dictatorships to become examples of vibrant democracies, as well as broader gains in economic growth, health outcomes, and education across the continent.

Thomas-Greenfield concluded her prepared remarks by underlining the importance of a strong US-Africa relationship to tackle the problems of the future while securing progress of the past.

In a dialogue with Pham at the start of the question-and-answer period, Thomas-Greenfield characterized the US-Africa Leaders Summit in August 2014 as the top achievement, among several, of her tenure as assistant secretary. She also described the outbreak of civil war in South Sudan in December 2013 as the nadir of the period, lamenting the “man-made” famine that now threatens millions of people in Africa’s newest state as a result of the continuing conflict.

The program was followed by a reception in honor of the outgoing assistant secretary.