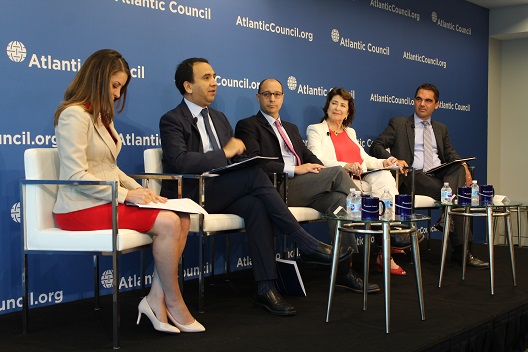 On July 12, the Atlantic Council’s Adrienne Arsht Latin America Center hosted an event titled, “AMLO’s Election: What Does it Mean for Mexico, NAFTA, and Beyond?” The event explored the aftermath of President-elect Andrés Manuel López Obrador’s (AMLO) historic election on July 1, 2018 and its impact on the future Mexican domestic policy and hemispheric relations. Mexico has seen positive advancements in recent years, including a flourishing startup-culture, increased access to technology and innovation, and high degrees of civic engagement and grassroots activism. Despite this progress, deep-rooted, systematic problems remained at the forefront of voters’ minds: crime and insecurity, corruption, and a stagnant economy.

Opening the event, Marczak highlighted AMLO’s victory as a historic and transformative moment for Mexico. López Obrador built his campaign on a promise for a change, tapping into public disenchantment with the status quo and an immense desire for change. Building on this, Ortiz-Mena described the election as a critical election, one that fundamentally changes the way in which Mexican politics works. To Ortiz-Mena, establishment parties—PRI and PAN—represented the status quo and failed to deliver on key policy issues such as economic growth. Describing the significance of AMLO’s victory, Ortiz-Mena stated, “This is really a reset with the Mexican political establishment.”

With the largest vote tally and a 30% margin of victory in Mexico’s democratic history, President-Elect López Obrador has been given a decisive mandate to enact change. Winning sizable delegations in the Congress and a majority of the governorships, President-Elect López Obrador and MORENA have the power necessary to act upon his campaign promises and bring his vision for Mexico into fruition.

As a result, the panel discussion emphasized AMLO’s specific policy proposals regarding combatting crime, reducing corruption and levels of impunity, strengthening the economy, and forging or maintaining foreign relations.

Mexico has witnessed unprecedented levels of crime in 2018 with over one hundred political candidates and several journalists killed over the course of the election period. When asked about specific, short-term measures that could be adopted to counter these trends, Briseño focused on AMLO’s two most thorough suggestions: the creation of a Ministry of Public Security, and amnesty for low-level, drug-related offenses with an emphasis on peace and reconciliation.

Combatting crime requires a multi-faceted response because, as Pereira said, it relates closely to the issue of impunity and corruption. A 2016 study indicated that the plurality of respondents were not satisfied with the Peña Nieto administration’s response to corruption. AMLO has prioritized the battle against corruption in the campaign and his statements in the aftermath of his victory. According to Marczak, “Corruption is issue number one, issue number two, and issue number three [for AMLO].”

To this point, AMLO has depicted corruption as a top-down problem that can be solved by placing non-corrupt people in power. However, Ortiz-Mena urged the new administration to look carefully at the process of decision-making, specifically as it relates to who is deciding these issues and how they are making these decisions. To do so requires incorporating all segments of society—specifically civil society organizations and businesses—to tackle corruption at all levels, according to Ortiz-Mena.

Linking corruption to insecurity, Marczak addressed the targeting of political candidates and journalists, arguing that these assassinations should be investigated from day one to bring perpetrators to justice. He argued that to do so would reduce the political stain that these unprosecuted cases leave on the freedom of the press and the Mexican political system.

Regarding the economy, AMLO seeks to address the notion of the Two Mexicos and the disparity between socioeconomic strength between the North and South. To combat these inequalities, Marczak explained, AMLO will focus on educational reform, increased scholarship, job training programs, and more.

A critical issue that falls under economic discussion is the ongoing NAFTA renegotiation. Stern cautioned the audience from expecting an immediate NAFTA deal, explaining that there is no rush on behalf of the US Executive Office or Congress because of the recently announced Supreme Court appointment. She did, however, point out positive indicators for the NAFTA negotiation, specifically issue areas in which the Trump and López Obrador administration agree such as increasing wages. Marczak echoed this sentiment, pointing out that the AMLO proposal to prioritize security, migration, and the economy resonate with the Trump administration.

Regarding the technical logistics of the negotiation itself, Ortiz-Mena suggested that there would be continuity in terms of Mexico’s negotiators between the Peña Nieto and AMLO teams. For Stern, Canada will play a vital role in reinforcing shared positions and pushing back against divisive proposals like the sunset clause. Ultimately, Ortiz-Mena claimed that the final product between the two administrations would look very similar, with some differences in regard to labor-related issues.

“The fate of NAFTA lies at 1600 Pennsylvania Avenue, NW—not with AMLO,” Ortiz-Mena concluded.

Concluding the event, the speakers discussed the future of Mexico’s foreign relations. Briseño pointed out that this is the first foreign policy doctrine crafted by a left-leaning government. He explained that AMLO benefits from the cordial relations with the US and the Trump administration to this point, whereas Peña Nieto suffered from the controversial invitation the Mexican government extended to Trump in 2016. Moving forward, Briseño suggested that Mexico will hold the line on important issues like other allies to the US—Justin Trudeau, Angela Merkel, and Emmanuel Macron.

Regarding the hemisphere and the crises within Venezuela and the Northern Triangle, Marczak suggested there will be less Mexican involvement due to AMLO’s “Mexico First” policy, For this reason, AMLO will primarily be concerned with addressing domestic issues such as corruption, crime, and the economy rather than intervention. However, Ortiz-Mena indicated that there might be some changes here due to the administration’s and MORENA’s commitment to human rights.