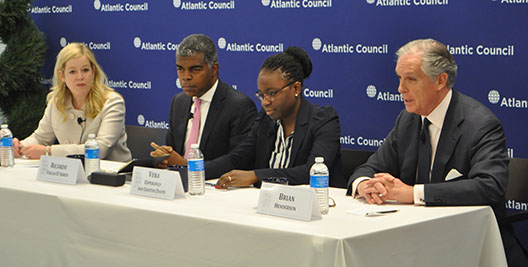 The economy of Angola is on the verge of a major transition: financial market regulations have been established, secondary debt markets are opening up, and a new stock exchange will be coming on line in 2016. This was part of the optimistic assessment presented by Vice Governor of National Bank of Angola Ricardo Viegas D’Abreu and Vera Esperança dos Santos Daves, Executive Director for the country’s Capital Markets Commission. Within the context of Africa’s buoyant economic prospects, Angola’s rapidly changing financial system constitutes a critical component in the continent’s economic narrative.

Daves and D’Abreu gave a comprehensive outline of Angola’s efforts to expand capital markets and modernize its economy at an April 10, event hosted by the Atlantic Council’s Africa Center and moderated by Brian C. McK. Henderson, treasurer of the Council’s Board of Directors. The panelists were joined by Maureen Harrington, head of the International Development Group at Standard Bank, Africa’s largest bank, who provided an impartial private industry perspective on the macroeconomics of Angola, and on private financing efforts throughout Africa.

D’Abreu made clear that as the Angolan economy becomes more complex and as new challenges to continued economic growth emerge, it is the objective of the National Bank of Angola and the Angolan government to intervene in critical ways. According to D’Abreu, Angola’s primary challenges are the need to promote infrastructure development, institutional and human capital development, and to ensure the effective diversification of the economy. Despite the challenges, D’Abreu argued, the Angolan government is methodically and successfully implementing robust regulatory systems; attracting new investors to critical sectors in the Angolan economy; and sustaining the macroeconomic process spurring GDP growth. Daves followed up Abreu’s comments by discussing the efforts of the Capital Markets Commission to advocate corporate governance best practices. The Commission’s major goal for the near future is to secure approval of a securities code and financial futures regulations.

Harrington offered her assessment that international banks are responding positively to Angola’s market reforms. Standard Bank has been in Angola for the past four years and now has 27 branches in the country, and has enjoyed 100 percent markets growth in the past year. This growth reflects both the broad growth in investor opportunities across Africa, and especially in Angola, and the enormous local demand for the loan and debt products offered by Standard Bank.

During the question and answer portion of the event, panelists were asked to discuss the Angolan government’s efforts to alleviate the country’s massive poverty by extending financial and banking services to a broader, and particularly rural, section of the population. Harrington also described private sector efforts on these lines, noting that the expansion of financing and banking opportunities to the poor is increasingly perceived as profitable as well as socially responsible. Other questions delved into issues of future growth, transparency, legal norms, and corruption in Angola’s financial dealings.

The event opened with welcome remarks by J. Peter Pham, director of the Africa Center; Jeannine Scott, president of the US-Angola Chamber of Commerce; and Hamilton Costa, US representative for the Angolan National Agency for Private Investment (ANIP).

The discussion was sponsored by the Africa Center in partnership with the US-Angolan Chamber of Commerce, with assistance from ANIP.