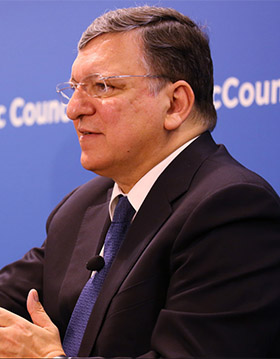 The Atlantic Council kicked off the second day of the conference “Toward a Europe Whole and Free” with a keynote conversation featuring José Manuel Durão Barroso, president of the European Commission. With the crisis in Ukraine unfolding, the Transatlantic Trade and Investment Partnership (TTIP) negotiations on the agenda, and the European Parliament elections quickly approaching, President Barroso outlined how these developments pose both opportunities and challenges for Europe’s unity.


President Barroso described the Ukrainian crisis as “the biggest challenge to peace in Europe since the fall of the Berlin wall, if not even since the second World War”, particularly in terms of its possible implications not only for European, but for global peace and security. He emphasized the importance of Ukrainian sovereignty and right to associate with both the European Union and Russia, a right now contested by Kremlin. For President Barroso, the main question the Ukraine crisis has raised is whether Russia chooses to stand by the European and transatlantic values and the international law, or intentionally breach them. To best respond to Russian actions in Ukraine, the European Union jointly with its partners, particularly the United States, needs to make it clear that it is possible to have an independent, sovereign, democratic, and prosperous Ukraine that will one day stand as an example of cooperation between Europe and Russia.

Addressing the economic sanctions implemented by the European Union against key Russian individuals involved in the crisis, President Barroso argued that the sanctions are an important way of demonstrating the Russian leadership the consequences of its actions, subsequently reaching de-escalation of the conflict. The European Union as Russia’s largest trading partner has already been able to have an impact on Russian economy as crucial investment decisions have been stopped, Russian economic growth has fallen, and its credit ratings have been downgraded. The European Union has also been successful in coordinating these sanctions with the United States, particularly through the newly established G7, turning the sanctions regime into a general transatlantic movement.  However, as several member states of the European Union remain dependent on Russian energy exports, President Barroso said that the European Commission will need to continue promote the idea of energy security. First steps towards a new energy security program have already been made, as the European Union recently agreed to diversify its sources of energy supply through a new southern energy corridor.

President Barroso also addressed the importance of continued negotiations on the TTIP agreement. He emphasized his continuing support for the agreement, arguing that it as the largest trade and investment agreement can have a transformative role not only for the European Union and the United States, but also for the global economic order. Regarding the upcoming European Parliament elections in May, President Barroso voiced his strong belief in the prevailing of the moderate, pro-European parties, viewing the anti-European sentiments in some member states as a normal phenomenon in times of financial insecurity.

The opening panel of the second day of “Toward a Europe Whole and Free” was moderated by the Atlantic Council President and CEO Frederick Kempe. The conference celebrates the historic enlargements of NATO and the European Union and considers how best to sustain Europe’s path toward peace and prosperity despite the most dangerous challenge to that vision since the Cold War.