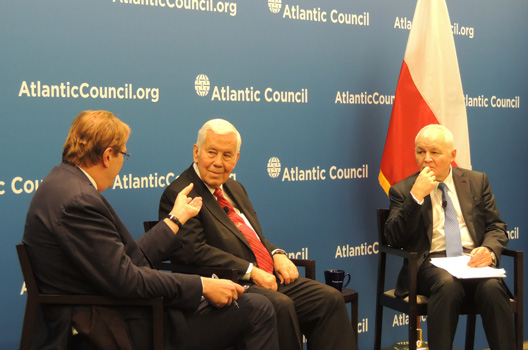 The Atlantic Council hosted the 2014 Bronislaw Geremek Lecture on the evening of November 6 at its headquarters in Washington, DC. The lecture series is an initiative launched by the Atlantic Council and the Government of Poland in 2009 to honor one of the great heroes of the Solidarity movement in Poland—and as a reminder of the transatlantic community’s continued commitment to democratic change and a “Europe Whole and Free.”

The night’s events began with Frederick Kempe, president and CEO of the Atlantic Council, who opened the lecture by placing the evening in a wider historical context, and poignantly reminding the audience that “the job of freedom is never done.”

Richard Lugar, who served as Senator during the tumultuous events in the early 1990s, then offered an introduction and commentary on the impact of the events in Poland and how those events became a model for Eastern Europe and around the world. There was perhaps no better person to do the honor of introducing Jan Krzysztof Bielecki, as Lugar was the first US senator to meet with Bielecki during his time as prime minister of Poland. Lugar referred to the year of Bielecki’s time in office as a “critical year” of 1991, when Poland was in the midst of a difficult democratic transition.

Bielecki’s stewardship of Poland during that period heralded a swift political and economic evolution in the region that may argue became the foundation of Poland’s success today. And, although no country is perfect, Bielecki began his own speech by stating that he ultimately feels “fulfilled” with all that Poland has achieved in the decades since the transition. He also praised the United States for its role in the transition, stating that “none of what [Poland] has achieved would have been possible with America’s unwavering support.”

It is impossible, however, to discuss the successes in Central and Eastern Europe without comparing them to the challenges the region faces today, and the moderated conversation between Lugar and Bielecki quickly turned to this subject. Looking back, Bielecki noted that in 1991 everyone believed the West’s global leadership role would be unchallenged, and that the biggest remaining problem would be reintegrating the former communist countries into the West.

However, Bielecki warned that we are now seeing a severe test to the transatlantic community of values. He cautioned that Russia’s challenge is “even graver than it may appear” and threats to our security and way of life have become more and more apparent. “The problem with Russia is that Russians refuse the ideals that we recognize as the foundation of our system.”

“The West is no longer facing aggressive posturing, it is facing aggressive acts.” Bielecki recommended that the only way to overcome this challenge is to accept the new situation and to begin acting strategically. Though Bielecki gave his support for the economic sanctions that the West has placed on Russia, he noted that they are not a short term solution. “We need more than an economic deterrent; we also need a military component,” he stated, admitting that finding a compromise on how to provide this type of assistance is controversial.

The hour-long lecture closed with a discussion of NATO and the role of the West in addressing the challenges to Europe’s East. Having served for years as chairman of the Senate Foreign Relations Committee, Lugar used his first-hand experience to comment on the difficulty of engaging members of Congress on these issues. He suggested that holding a number of both public and private hearings would help drum up public support for a solution to the problem and to get many more people involved in the decision making process.

According to Lugar, if there is anything positive that can be said to have resulted from the conflict in Ukraine, it is that it has revived interest in NATO. Although there has never been a “greater force for European peace than NATO,” before the crisis erupted there had been lingering questions over the role NATO should play in Europe today. As Lugar specified, “NATO wasn’t dying, but it wasn’t living a very vibrant life, either…We have all become much more alert.”

Bielecki closed the evening with the admonition that everyone—Russia and the West—needs to start living up to the agreements they have made, whatever they may be. If not, then they need to be prepared for the consequences.