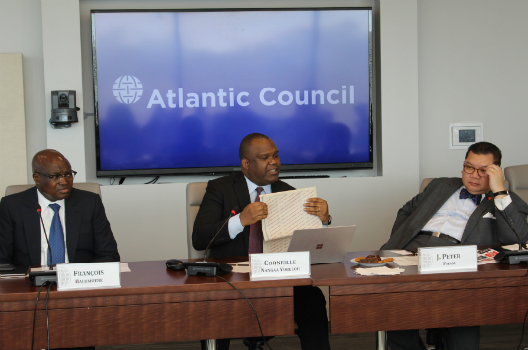 On Thursday, October 5, the Atlantic Council’s Africa Center hosted an exclusive briefing with Mr. Corneille Nangaa Yobeluo, President of the Independent Electoral Commission (CENI) of the Democratic Republic of the Congo (DRC).

In his remarks, Mr. Nangaa briefed attendees on the DRC’s upcoming electoral timetable, structure, and procedures, which are due to be announced publicly in Kinshasa next week. He also spoke about the logistical difficulties the DRC faces, but expressed optimism for the future. Mr. Nangaa discussed the ongoing voter registration efforts, noting that approximately 42 million people have been registered country-wide, and claimed that the improved security situation in the Kasai region should allow authorities to complete the process by year’s end.

A discussion, moderated by Africa Center Director of Programs and Studies and Deputy Director Bronwyn Bruton, followed Mr. Nangaa’s prepared remarks. The conversation was an energetic exchange during which the majority of participants challenged the integrity of the process outlined by Mr. Nangaa.

Mr. Nangaa was accompanied by H.E. François Balumuene, Ambassador of the DRC to the United States. In attendance and participating in the roundtable were a number of US and non-US government officials, business leaders, and civil society actors.