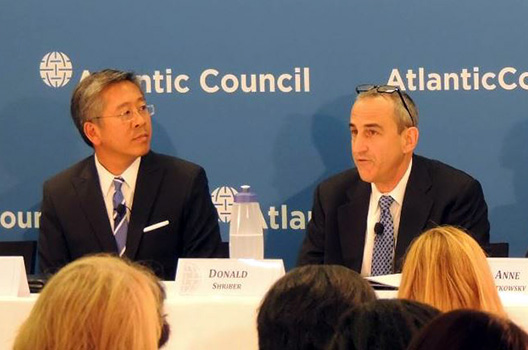 The Ebola epidemic, currently affecting multiple countries in West Africa, seized the US news cycle on September 30 when the Centers for Disease Control and Prevention (CDC) announced the first case of Ebola in the United States. The epidemic has already claimed more than 3,300 lives, and the CDC last week reported the possibility of more than 1.4 million new infections by January 2015 if the disease’s exponential spread is not slowed immediately.

On October 2, the Atlantic Council’s Africa Center hosted a discussion in coordination with Aspen Healthcare Services on the international response to the Ebola outbreak—focusing on current efforts and long-term lessons the world should draw from the crisis. Director J. Peter Pham welcomed attendees and provided context for the ensuing panel discussion that featured Donald Lu, deputy coordinator for the Ebola response at the US Department of State; Donald Shriber, deputy director for policy and communication at the CDC Center for Global Health; Anne Witkowsky, deputy assistant secretary of defense for stability and humanitarian affairs at the US Department of Defense; Colonel Nelson Michael, director of the US Military HIV Research Program at the Walter Reed Army Institute of Research, who is applying his years of experience working to develop an HIV/AIDS vaccine to the US government’s push to develop an Ebola vaccine; and Kristi Rogers, managing director and CEO of Aspen Healthcare Services, which has continuously operated a full-fledged clinic in Monrovia through the current crisis.

Panelists noted that the unprecedented scope of the Ebola epidemic requires urgent response and scale up from the international community. Panelists agreed that the United States is serving as a leader in response to the crisis—particularly in light of President Obama’s announcement of Operation United Assistance, which currently includes nearly 200 US military personnel on the ground in Liberia, with more to arrive in the coming weeks.

Speakers emphasized that coordination among local governments, US forces, and the private sector is integral to countering the epidemic. Michael detailed the efforts the US government—in cooperation with other countries—has accelerated to create an Ebola vaccine, and said that several were promising though they have yet to be tested on humans.

Several panelists reiterated the importance of maintaining open borders among affected states and neighboring countries. Rogers suggested that the private sector should be utilized by the international community as a force multiplier in addition to US government and military personnel and local government efforts. As the global response to Ebola moves forward, panelists called for sustained and increased interagency coordination, cooperation, and transparency, and warned of the consequences of not doing so.