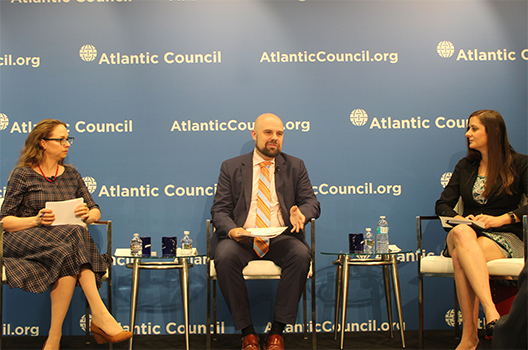 On October 24, the Atlantic Council’s Africa Center partnered with The Sentry at the Enough Project to host a discussion on the Democratic Republic of the Congo (DRC)’s conflict gold trade, occasioned by the release of the group’s new report: The Golden Laundromat.

Atlantic Council Vice President and Africa Center Director Dr. J. Peter Pham welcomed guests and stressed the event’s timeliness, just two months before the country’s long-overdue elections. Enough Project Managing Director Brad Brooks-Rubin outlined the scale and scope of the gold trade and the numerous approaches that have been developed to stem the flow of conflict gold. In particular, he underscored how the international community has changed its approach to conflict minerals in recent years, shifting from policies and regulations aimed at banning trade in goods financing conflict entirely to due diligence and risk-based approaches. Brooks-Rubin argued that information and political will are key to the success of these new approaches, and while a lot has been done to clean up the gold trade, far too many armed groups continue to profit from it.

Lezhnev provided an overview of the report, highlighting a specific corporate network and the ways in which it appears to have refined illegally-smuggled conflict gold from eastern DRC at the African Gold Refinery in Uganda. He further outlined the many ways in which this corporate network appears to be noncompliant with international due diligence and anti-money laundering (AML) frameworks, raising several AML red flags outlined by the Financial Action Task Force, and offered recommendations to governments, companies, and consumers. In particular, Lezhnev recommended:

1.       Network sanctions against companies involved in the conflict gold trade, their corporate networks, and their beneficial owners. He noted that both the new trading network and the rival one that immediate proceeded is important, otherwise one may simply replace the other, and the important point is to build up the legitimate, conflict-free trade;

2.       Anti-money laundering measures, including advisories, to identify conflict gold from the Great Lakes region and/or from certain traders as a class of transactions that would be of primary money laundering concern;

3.       Enhanced scrutiny from banks and other gold purchasing companies when dealing with gold refining and trading companies.

Amster spoke about the Responsible Minerals Initiative within the Responsible Business Alliance and its work to provide tools and resources to companies that support due diligence and responsible sourcing of gold and other minerals from conflict areas. She noted that the processing, smelting, and refining process is often the pinch point in the gold supply chain as the materials become largely indistinguishable when purified gold is produced. Amster further acknowledged that the companies involved in the refining process are often the most difficult to audit and do not necessarily feel the same consumer pressure that a jewelry company might as they sit higher up in the supply chain.

In the discussion that followed, panelists discussed ways to incentivize responsible gold sourcing and the role of consumers in applying pressure on actors operating in the upstream and the downstream of the global gold trade.

Among those in attendance were H.E. Mull Sebujja Katende, Ambassador of the Republic of Uganda, Lieutenant General William Ward, former commander of United States Africa Command (AFRICOM), and a number of US and non-US government officials, business leaders, and civil society representatives.