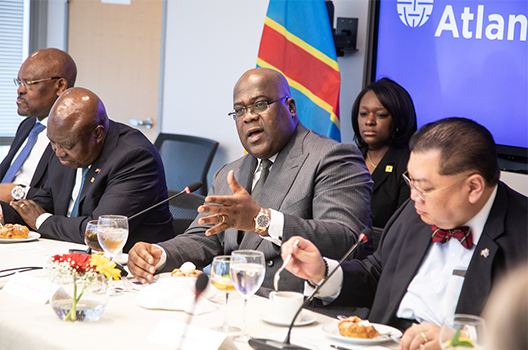 In his remarks, President Tshisekedi outlined his hopes to establish a strategic partnership with the United States, building off the strong relationship the two countries have enjoyed for decades and focusing on peace and security, the rule of law, and economic development.

President Tshisekedi, who was inaugurated on January 24, 2019, in the first-ever peaceful transition of power in the history of the DRC, seemed optimistic that the United States would deepen its security cooperation with his country, providing training and equipment to Congolese security and intelligence services to combat the plethora of armed groups and bad actors operating in eastern and northern DRC, singling out Islamic State efforts to establish a cell in the heart of Africa and the growing threat posed by the armed militants of the Allied Democratic Forces, who have been linked to foreign Islamist elements.

The President further expressed hope that his government could count on continued US support as he works to bring stability to the DRC, build stable institutions, and ultimately establish the rule of law. He finally underscored his country’s economic potential and his intentions to create a business-friendly environment and appeal to US investors, particularly in the energy, mining, and agriculture sectors.

A discussion, moderated by Pham, followed the President’s remarks, during which participants engaged the President on his recent electoral victory, his proposed reform agenda, and his plans to combat corruption and human rights abuses.

Image: Congolese President Félix Tshisekedi said at a meeting at the Atlantic Council in Washington on April 4 that he is seeking a “strategic partnership” with the United States. (Jeff Malet/Jeff Malet Photography)