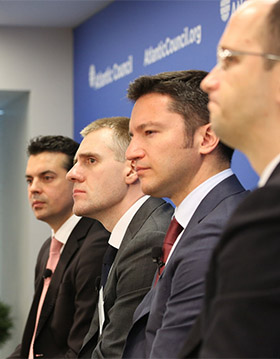 After an eventful start to the two-day conference “Toward a Europe Whole and Free,” and immediately following keynote remarks by US Secretary of State John Kerry, the Atlantic Council held a moderated panel discussion on “Consolidating Europe’s South” with four ministers from the region.

At a time when events in Ukraine have dominated recent international news, the panel on Europe’s South considered the growth of a region that has itself experienced significant periods of conflict.


With the NATO summit in Wales only a few months away, panelists pointed to NATO membership as a key policy priority for the Balkans. Montenegro and Macedonia are both NATO aspirants, as well as neighboring Bosnia & Herzegovina. Minister Luksic made clear the frustration in the Balkans with the enlargement process in light of Montenegro’s preparedness and willingness to join, and argued for NATO membership as a precondition for a stable Europe. Minister Poposki remarked on Macedonia’s constant support for NATO operations, despite not being a member, and noted that Macedonia’s contribution to the organization rivals that of any full member.  Minister Luksic agreed, and argued, “There has to be a clear commitment to the open door policy in our region. Europe cannot be whole free and at peace, unless countries from the western Balkans who want to become part of NATO, are able to become part of NATO.”

For the Balkans, NATO membership is also a two-way street. There was a consensus that the accession process can serve as “an excellent encouragement for other countries” to implement much-needed reforms. Minister Luksic pointed to four particular areas in which Montenegro has made progress: rule of law, modernization and management of Montenegro’s defense system, improvements to intelligence standards, and progress in explaining the benefits of membership to the general population. Similarly, Minister Poposki credited NATO as being the driving force in Macedonia’s reform process.

In making their points, all four panelists emphasized the interconnected nature of regional politics. Particularly among the relatively small countries that make up the Balkans, events in one country can have direct impacts on the region’s stability as a whole.  This political environment makes it imperative that the countries of Europe’s South are not viewed in isolation from one another; rather, it is necessary to maintain channels of communication and to focus on developing an integrated strategy for future growth, security, and stability. As Minister Luksic stated, “In order to prevent a future crisis, a joint system would perform in a better and solid way”.

Minister Bushati noted that there are still great challenges to be addressed in the Balkans. Among other issues, border disputes, mutual recognition problems, statehood questions, and ethnic conflicts still abound. Minister Bushati voiced a common complaint when he affirmed that “We still waste energy in who sits at the table rather than looking to how to solve the problems of the future.” The Kosovo-Serb agreement of April 2013 was widely hailed as a breakthrough in reconciliation, but remaining issues are still significant. “We must focus on finishing business where it can be finished,” said Minister Luksic

In order to address the challenges faced by the countries of southern Europe, many have pursued increasingly closer ties with the European Union. Montenegro, Albania, and Macedonia have all been clear in their goal to become full member states, and have looked to Bulgaria’s example as a relative newcomer to the European Union table.  Though Minster Bushati agreed that the journey of the Balkans to the EU has seen remarkable progress, he cautioned that the reaction of the European Union towards the Western Balkans has largely followed a wait-and-see approach. In his opinion, there is a great need for action: “The consolidation of the South is a challenging process, and it needs greater EU and US involvement.” He worried that without a greater interest in the future of the Balkans by the European Union, the growth process in the region could stretch indefinitely, and could ultimately result in a deeper fragmentation of the region—a consequence few would desire.

Minister Vigenin was decisive in his assessment. “Ultimately, we all have the same goals—greater stability,” he declared. The way to achieve this is lined with obstacles, but EU and NATO membership would be a significant step in the right direction. Much like Ukraine, the Balkans are at a decisive political moment, and it is important that the region gets the next step right.