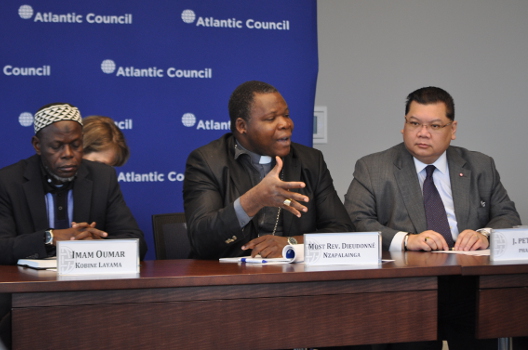 Of the many tragedies of the conflict that has engulfed the Central African Republic (CAR) for nearly a year, one of the greatest is that it has pitted Muslim and Christian communities that historically coexisted against one another. The violence has taken over five thousand lives, and in October, less than a month after the United Nations took over peacekeeping operations in the country, a new spate of violence struck the capital Bangui, raising questions about the effectiveness of the international community’s response.

In response to the deteriorating situation, the Africa Center co-hosted with Search for Common Ground an interfaith delegation of CAR religious leaders who have worked together since the beginning of the conflict to halt their country’s descent into violence, and have emerged as some of the strongest voices calling for further international attention and a new strategy: Imam Oumar Kobine Layama, president of the Central African Islamic Community; the Most Reverend Dieudonné Nzapalainga, Roman Catholic archbishop of Bangui; and Pastor Nicolas Guérékoyame-Gbangou, president of the CAR Evangelical Alliance. Africa Center Director J. Peter Pham welcomed guests and made introductory remarks, which were briefly echoed by Search for Common Ground’s Senior Program Manager for Africa Mike Jobbins.

Nzapalainga spoke of the futile efforts of the three different peacekeeping forces in the country to bring security, and questioned whether organized and transparent elections are possible in such an environment. The archbishop warned that elections next year risk reinforcing regional divisions and disenfranchising many who would be prevented by the violence from voting.

Layama described the failure of the interim government and international forces to protect civilians. He stressed that the 2013 United Nations-imposed arms embargo on the CAR has had a perverse effect by denying the national army the weapons it needs to bring security, and asked the international community to reconsider its approach.

Guérékoyame-Gbangou spoke of the need for a national dialogue that includes victims of the fighting, and struck a note of hope. Despite all sides of the conflict twisting religion to their cause, the pastor reinforced his and his fellow faith leaders’ continuing commitment to seek reconciliation and justice, with accountability, in the midst of a terrible conflict.

During the question and answer portion of the discussion, the panel addressed the importance of a robust disarmament, demobilization, and reintegration program, and the need for grassroots reconciliation processes as a long-term strategy to bring peace and stability to CAR. They also emphasized the need for the international community to have consistent and robust rules of engagement, including an effective mandate to protect civilians.