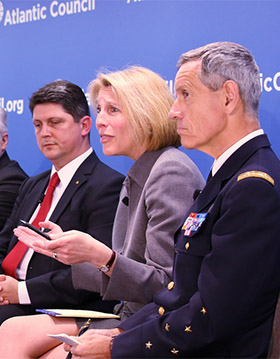 The Prime Minister of Latvia Laimdota Straujuma began the discussion by boldly arguing that “every nation has the right to make its own choices without intimidation or pressure from outside forces.” In order to define a strategy, it is important to understand the threat. According to Straujuma, the recent events in Ukraine are “about values, identity, and the vision for the future.” Regardless of economic or historic ties, countries such as Russia must respect the independence of Ukraine and the Ukrainian people’s right to choose their own future.

Next January, Latvia will also be in charge of the rotating presidency of the EU Council. Straujuma announced that Latvia will be a strong advocate for concluding TTIP and building a new strategic energy relationship between the US and Europe. She also disclosed that earlier in the day, she personally thanked Vice President Joe Biden for the deployment of US troops in Latvia. Straujuma greatly appreciated this important and timely manifestation of the US commitment to Latvia’s independence.

Foreign Minister of Lithuania Linas Linkevičius warned that Europe must not be idle, but must instead be active in strengthening ties with the East because other forces are active building a negative alternative to a Europe Whole and Free. He also argued that the threat to Europe Whole and Free did not begin after the Vilnius Summit, but much earlier in 2008 with Russia’s invasion of Georgia. Policy of not recognizing Russia’s seizure of the territory of other nations is good, but not sufficient. This crisis is not just about Ukraine. If the West returns to business as usual with Russia, Moscow will continue its aggression and the next stop may be Trandinistria. Linkevicius asked how many wake up calls does the West need?

Former Prime Minister of Poland Wlodzimierz Cimoszewicz revealed that he believes the response to Russia’s actions in Ukraine should be stronger than we have seen so far. Europe is facing naked aggression. It is easier and cheaper to stop aggressor earlier rather than later. Corlatean disagreed with Kerry’s view on the effectiveness of sanctions on Russia. He does not think there is a military solution to the Ukraine crisis, but economic decisions, such as exporting US LNG, could make a difference.

According to Cimoszewicz, Ukraine wasted 25 years avoiding reforms and now must move forward. He acknowledged that reforms are costly and painful, but they are necessary and the West must be tough on Ukraine’s leaders to make progress now.

Romania’s Foreign Minister Titus Corlăţean said that this is the most appropriate moment to discuss defining a strategy for Europe’s East. This is a dramatic situation for Romania because the crisis is taking place 200 miles from their border. Corlăţean believes that the problem is not just Vladimir Putin. The problem is the profile of the power and the leadership in Moscow. He also emphasized that essential nature of the transatlantic relationship because Europe cannot resolve this crisis alone, without US assistance.

President of the German Marshall Fund Karen Donfried argued that it is no longer accurate to continue to believe that Russia wants to cooperate with the West. In fact, if a whole & free Europe remains our long-term goal, it is uncertain that we can change Putin’s calculus. Donfried believes that even if we cannot change Putin’s behavior, “the most important thing we can do is make Ukraine a success.” Ultimately, Ukraine is responsible for getting itself back on the right track, but the Americans and the Europeans will play a critical role supporting them achieve success.

Supreme Allied Command Jean-Paul Paloméros defined NATO not as a club or a coalition of circumstances. He sees NATO as a strong alliance based on shared values and strong commitment. Furthermore, NATO has guaranteed peace in Europe for sixty five years. NATO’s strength has come from its political solidarity and military capability.

Palomeros emphasized three elements that should be part of a strategy for Europe’s East: deterrence, prevention, and reassurance. Deterrence is the heart of collective defense and Palomeros declared that NATO’s forces are ready and able to perform their collective defense tasks today. Prevention is also essential to avoid miscalculations and undesired activities. That is why NATO has approved new preventive military measures, such as reinforcing Baltic Air Policing, in response to the crisis in Ukraine. This is linked to reassurance, the need for which the allies closest to the crisis feel very strongly. Lastly, the Ukraine crisis has validated the need to continue to transform the Alliance, particularly as we prepare for the summit in Wales.

During the q/a, Linkevičius expressed his view that NATO deployments in the East have not been substantial so far, but may rise to that level in the future. Also, NATO should not limit itself to international agreements that Russia has already violated.

Cimoszewicz reminded everyone that the 150 NATO troops recently deployed in Poland may seem like only a few, but they have one million, three hundred thousand friends standing behind them. He also stressed that NATO should not constrain its actions due to agreements that Russia has broken.