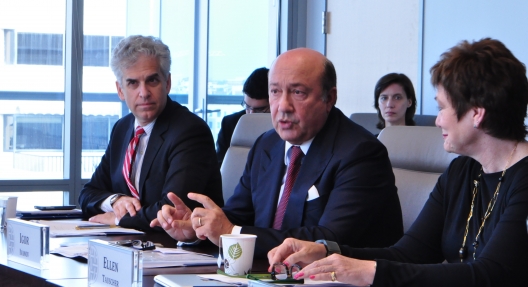 On October 3, 2013 the Atlantic Council’s Brent Scowcroft Center on International Security hosted an off-the-record workshop on the idea of “Mutual Assured Stability” with the leading experts in the field of US-Russia relations, hosted by Center Vice Chair Ellen Tauscher and former Russian Foreign Minister Igor Ivanov.

Relations between the United States and Russia have been famously tense after the Cold War. In order for both countries to keep the peace between them and around the world, Russia and the United States must move away from the idea of “Mutual Assured Destruction” to “Mutual Assured Stability.” This requires a discussion about multiple areas of the US-Russia relationship. Some issues discussed included missile defense; the situation in Syria; China’s role in the relationship; and the domestic and international political ramifications of a better or worse relationship.

The Beyond the Reset series is aimed at strengthening relations between the United States, Europe, and Russia. There series focuses on changing the paradigm governing relations between the United States and Russia from the Cold War construct of Mutual Assured Destruction to Mutual Assured Stability, and in fostering US-Russian cooperation with other stakeholders in the Asia-Pacific. The Atlantic Council’s Brent Scowcroft Center on International Security partners with the Russian International Affairs Council in this effort.