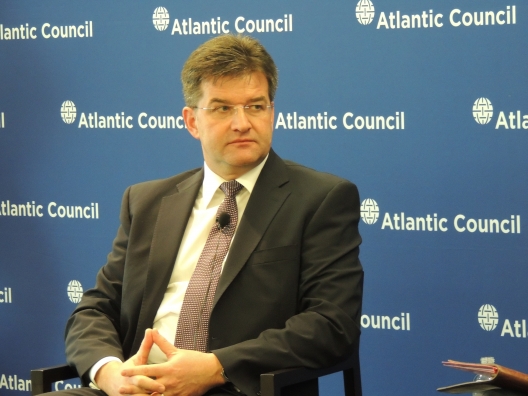 On November 5, Miroslav Lajčák, Deputy Prime Minister and Minister of Foreign and European Affairs of the Slovak Republic, was the featured speaker at a public event hosted by the Atlantic Council. Minister Lajčák’s visit to Washington comes only three short weeks before the European Union (EU) and the six former Soviet countries designated as “eastern partners” convene in Vilnius, Lithuania at the third Eastern Partnership Summit.

In his speech to a standing room only crowd, Minister Lajčák began by highlighting the various challenges the EU faces in the lead up to the Vilnius summit. Central to these challenges is how to respond to the significant pressure Russia has placed on the eastern partners to reject the EU and join its competing Customs Union instead. From the EU perspective, Russia’s Customs Union is incompatible with the association agreements the EU hopes to formalize in Vilnius, and the partner countries must make a decision as to which path they intend to follow. Minister Lajčák emphasized that the EU’s offer to build a relationship with the partner countries must ultimately be based on soft power—the EU’s ability to “attract and inspire”—and not on any political pressure exerted on the relevant parties, or long term efforts at cooperation are unlikely to be successful.

Minister Lajčák also addressed the issue of selective justice in his speech, an area of concern for the EU as the summit approaches. The imprisonment of former Ukrainian Prime Minister Yulia Tymoshenko has been a particular sticking point in relations between Ukraine and the EU, as the European Court on Human Rights judged her imprisonment to be politically motivated. Minister Lajčák admitted that the EU is unlikely to initial an association agreement with Ukraine unless the selective justice issue is satisfactorily resolved.

The question and answer session that followed Minister Lajčák’s speech tackled matters ranging from what to expect from the Eastern Partnership after Vilnius to a comparison of the EU-Eastern Partnership relationship with the EU’s actions in the Balkan region. The lively discussion included input from multiple ambassadors and policymakers currently active in the region.

Minister Lajčák concluded the event with an appeal to the transatlantic community to continue to evolve the conversation on the Eastern Partnership. He suggested that the United States could play a valuable role in supporting the EU on its developing relationships with its eastern neighbors. A more cooperative EU relationship with its eastern partners would benefit not only the immediately involved parties, but the transatlantic community as a whole. Ultimately, the EU is on the right track towards further integration with its partners, according to Minister Lajčák, and despite the challenges inherent in the process, the Vilnius summit will provide the perfect forum to formalize the EU commitment to its eastern neighbors.