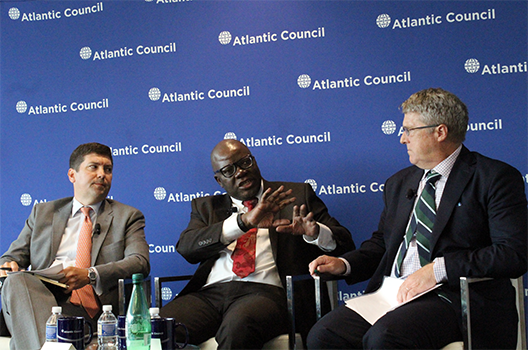 Mills laid out various challenges to African democracy and argued that the continent’s rapid demographic growth “demands an end to business as usual.” He stressed that democratic governments have historically performed better than their authoritarian counterparts in promoting development, noting that societal openness generally corresponds to lower volatility and higher economic growth. Mills acknowledged that exceptions do exist but maintained that the often-highlighted cases of Ethiopia, Rwanda, and Singapore are not sufficiently prescriptive or replicable in other African states. Commenting on international aid for democracy and governance promotion in Africa, he purported that although international engagement is not a silver bullet, targeted external assistance can make a difference.

Expounding upon Mills’ remarks, Biti highlighted the threats posed to democracy around the world by burgeoning populist and nationalist movements, as well as the spread of international terrorism. He critiqued the narrative that elections equate to democracy, emphasizing the equal importance of civil and political rights and holding leaders to account. Biti further highlighted strong institutions, constitutionalism, an empowered citizenry, and a free market as critical democratic guideposts. He concluded that democratic progress should not necessarily be measured on election days, but rather during the periods in between.

In the ensuing discussion moderated by Hudson, panelists discussed the best ways for regional and international organizations to approach democracy promotion, the decline in international laws and norms, and the effects of the youth bulge on democratic demands on governments. Members of the audience also engaged the panel on the impact of urbanization, diaspora groups, and migration on the future of democracy in Africa.