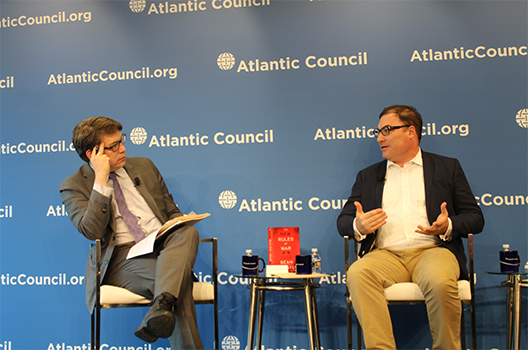 On Thursday, June 6, the Africa Center hosted a public discussion on the future of warfare, occasioned by the launch of Senior Fellow Dr. Sean McFate’s latest book The New Rules of War: Victory in the Age of Durable Disorder.

McFate challenged mainstream understanding of war and peace, arguing that the United States is failing to adapt to modern approaches to warfare. While the US has focused on deterring conventional warfare since well before 1945, he argued that some adversaries have taken more creative approaches to military action, moving beyond the battlefield to new forms of conflict, fought not necessarily between nation-states but rather by corporations, mercenaries, rogue states, and other less traditional combatants. McFate pointed to Russia’s use of disinformation, masked troops, and covert operations to seize Crimea, as well as China’s creeping militarization of the South China Sea, to highlight adaptive approaches to hit enemy weak spots. Simply put, warfare is becoming more cunning, and a blind reliance on technology, tactics, and operations will not win today’s wars. Instead, McFate asserted that the US must adapt to a new age of “durable disorder” and provided ten prescriptive solutions to help policymakers be more strategic in the ways they approach modern-day security threats.

Dukhan, a Central Africa expert, applied the concepts outlined in McFate’s book to the conflict in the Central African Republic (CAR), highlighting many similarities between the situation on the ground and McFate’s conception of the future of warfare. Dukhan described CAR as a weak state dominated by myriad armed groups each with their own motivations and ideologies. Foreign contractors like the Wagner Group have entered the country’s security sector and regional mercenaries are allying themselves with local warlords, competing for resources and further destabilizing the region. In this context, Dukhan remarked that conventional approaches to security are failing, citing French troops’ inability to reclaim the city of Bambari from an entrenched warlord culture.

In the ensuing discussion, members of the audience engaged the panel on strategic approaches to combat nontraditional forms of warfare without compromising moral and democratic standards.