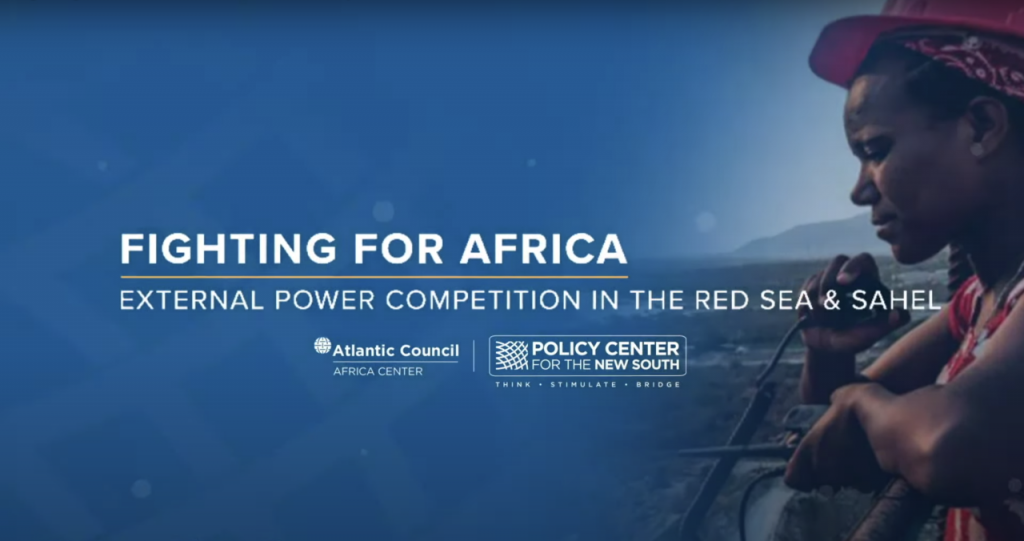 On Monday, December 14, and Wednesday, December 16, the Africa Center and the Policy Center for the New South (PCNS) hosted joint public events to launch twin reports on the evolving roles of the traditional and emerging external powers in Africa.

The first session, viewable here, focused on external influence in the Red Sea region. Africa Center Director of Programs and Studies Ms. Bronwyn Bruton moderated the panel, which included Africa Center Senior Fellow Mr. Gabriel Negatu, alongside PCNS International Relations Specialist Ms. Maha Skah and PCNS Senior Fellow Dr. Khalid Chegraoui. The event served as an opportunity to highlight the role of foreign actors in multiple arenas across the region, including in negotiations over the Grand Ethiopian Renaissance Dam (GERD), the conflict in Ethiopia’s Tigray region, the lifting of Sudan from the US state sponsors of terrorism list, and maritime trade diplomacy, among other topics.

Dr. Chegraoui gave opening remarks by providing a comprehensive overview of how emerging powers—such as the Gulf countries, Turkey, Iran, and others—are wielding influence in different parts of the region, and how the new relations between Israel and Arab states could create a new security dynamic in East Africa. Mr. Negatu then followed up by discussing how the situation in Ethiopia marks the beginning of a post-TPLF-dominated Ethiopia, which creates the opportunity for an Ethiopia-Eritrea alliance that could redefine the region’s outlook. Though an inward-looking trend in Ethiopia, as the country reconstructs and rehabilitates the Tigray region, could open the Horn to further strategic competition as external powers look to capitalize. Lastly, Ms. Skah reflected on the role of Emirati port building, Turkey’s enhanced commercial role in Somalia, and how Horn countries are essential to Israel’s commercial and strategic interests, creating an impetus for further engagement. Ms. Bruton concluded the discussion by striking a hopeful tone that the shifting regional security arrangement will bring newfound economic prosperity to countries in the region.

The second session, viewable here, zeroed in on the Sahel region, another geostrategic flashpoint where external powers are wielding influence. PCNS Senior Fellow Dr. Khalid Chegraoui moderated the panel, which included Africa Center Senior Fellows Dr. Pierre Englebert and Mr. Abdoul Salam Bello alongside PCNS Senior Fellow Mr. Rida Lyammouri. The event presented an opportunity to discuss the ongoing security situation in the region, how local, state, and regional governments are responding, and the role foreign actors are playing in the military and economic spheres.

Mr. Bello opened his remarks by framing the conversation around population growth trends and how they are putting pressure on Sahel countries to provide basic services to their population. The role of state governments is weakened by their inability to provide security, education, healthcare, and jobs, creating a void for non-state actors—including prominent terrorist groups—to gain legitimacy by providing some basic services to populations in rural areas. Dr. Englebert then followed up by emphasizing how foreign military interventions in the region, such as France’s Operation Barkhane, are band-aid solutions to the structural crisis posed by weak state institutions. Dr. Englebert suggested short and long-term solutions to improve security and governance in the region, both of which include granting more agency and capacity to African institutions rather than relying on external powers. Mr. Lyammouri reiterated these points by emphasizing that international solutions to address the Sahelian crisis have largely failed, contributing to a pervasive sense of mistrust between citizens and state governments.

Dr. Chegraoui then stepped in to pose various questions to the panelists around where external powers—namely China, Russia, and the United States—are engaged in the region, if France can remain the major external player in the Sahel, and how the COVID-19 pandemic may affect humanitarian efforts. Dr. Chegraoui concluded the discussion by thanking the panelists and expressing his hope further collaboration between the Africa Center and PCNS.

Startup Acts are the next form of policy innovation in Africa

Africa’s COVID recession certainly hasn’t hit the continent’s tech industry. In fact, as countries adapt to the expanding digital universe created by COVID-19, technology ecosystems across the continent are booming—and global investors have noticed. Attempting to cash in, African countries are trying to bolster their own innovation ecosystems through supportive legislation.