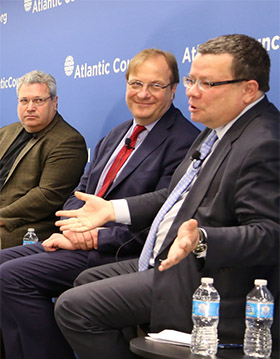 Opening Panel of Toward a Europe Whole and Free

As the world stands by watching how the crisis in Ukraine will unfold, leading historians discuss the lessons gleaned from the past hundred years of Europe’s history that defined the contours of today’s European security landscape. This panel discussion featured Dr. Robert Kagan of Brookings, H.E. Alexandr Vondra, former Minister of Defense of the Czech Republic; and Fred Kempe of the Atlantic Council.

Speaking on World War I and how it shaped the international system, Kagan illustrated that Europe, on its own, has never successfully dealt with a predatory power in its midst. This stems from a continual unwillingness to fully commit to defending its neighbors – allowing other nations to be picked off one by one while other powers look after their own interests. History has shown that Europe as a strategic entity does not function unless the United States is willing to play an on-the-scene role on a permanent basis with sufficient and reliable commitments to the defense of its allies. Kagan claimed that the world is once again facing this situation; that Europe on its own is unable to meet the challenge of a rising hegemon and predatory power, and the uncertain response of the United States to turmoil in Europe’s East is once again contributing to the potential breakdown of European peace and security.

Kempe spoke on the post-WWII division of Germany and its impact on post-Cold War dynamics that still reverberate across Europe today. In comparing the state of Berlin in 1961 to the current crisis in Ukraine, Kempe argued that President Kennedy’s acquiescence to Russia’s construction of the Berlin wall did not decrease tensions, as hoped, but rather emboldened Russia to further test the limits of what the United States would allow. Additionally, the 1961 Berlin crisis partially led to the Cuban Missile Crisis. Kempe posed the question that if President Kennedy’s acceptance of the construction of the Berlin wall anchored the Cold War in a mutual hostility that lasted three decades, what will US actions in Ukraine mean for the next generation?

Moving forward in history, Vondra compared the Ukrainian crisis with other struggles for independence across Central and Eastern Europe. He cited many similarities across history, including similarities in doctrine, slogans, and motivations. However, Vondra claimed that the Ukrainian struggle cannot be truly successful with only grassroots resistance. Unlike the current situation in Ukraine, the independence movements of former Soviet-bloc countries were up against an enemy that was under pressure from all sides. Communism was set to implode from the pressures of the international system, economic reform, and loss of popular support. Vondra concluded that the Maidan movement must find a way to adjust, as it faces an enemy with limited pressure from the international community.

This panel was the first in the two-day conference “Toward a Europe Whole and Free” celebrating the historic enlargements of NATO and the European Union and considering how best to sustain Europe’s path toward peace and prosperity despite the most dangerous challenge to that vision since the Cold War.