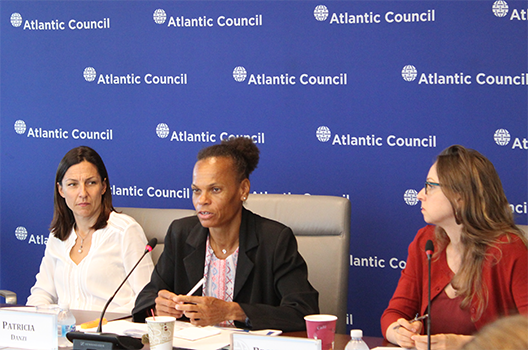 In collaboration with the International Committee of the Red Cross (ICRC), the Atlantic Council’s Africa Center hosted a discussion on internal displacement on Wednesday, July 11. The event featured Ms. Patricia Danzi, the ICRC’s regional director for Africa, along with members of the ICRC’s regional delegation in Washington.

In her remarks, Danzi acknowledged that there is often confusion surrounding the terms internally displaced person (IDP), migrant, and refugee. She argued that IDPs are the most vulnerable and difficult to account for, often dispersed in “IDP Belts” around urban areas in a wide range of living situations, unable to flee the country from threats such as conflict, human rights violations, and sudden-onset natural hazards. She further discussed the causes of displacement across Africa.

Danzi stressed that the African Union Convention for the Protection and Assistance of Internally Displaced Persons in Africa (Kampala Convention), and the existing guiding principles on internal displacement, are excellent instruments to ensure that states respect humanitarian law, human rights, and other responsibilities related to protecting and assisting the internally displaced. Moreover, the leadership the African Union has shown on IDP issues, pushing through the first legally binding regional treaty to address IDP protections and declaring 2019 the “Year of Refugees, Returnees, and Internally Displaced Persons in Africa,” cannot go unsung. However, ICRC representatives stressed that many states in Africa must go one step further and adopt legislation that can codify rights in the Kampala Convention into domestic law, and strengthen local mechanisms for responding to the needs of families forced from their homes by conflict and violence. Donors should also encourage parties to the Kampala Convention to pass such domestic legislation.

Further, while these existing frameworks and humanitarian response plans are generally successful at providing basic services needed to keep IDPs alive in camps, Danzi argued that they do not go far enough, failing to provide the “next step” of access to employment, living services, and a more prosperous life. Danzi called on actors beyond the humanitarian community to work more closely with non-governmental organizations to integrate aid for displaced persons into national strategies and elevate IDP issues to the highest levels.

A discussion, moderated by Ms. Bronwyn Bruton, Africa Center director of programs and studies and deputy director, followed Danzi’s remarks, focusing on the best way forward for donors and governments to effectively address IDP issues, as well as the most effective government structures to coordinate humanitarian response plans to internal displacement across the continent.