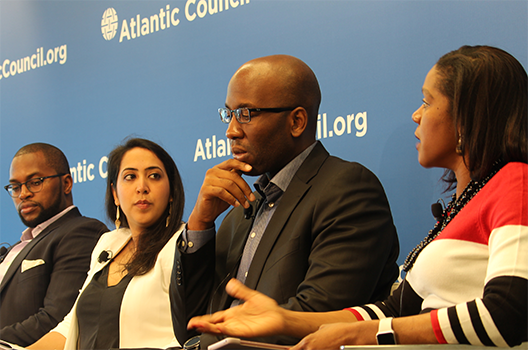 During the discussion, Dosani and Ayeni outlined the crucial role of the startup community in Africa’s fintech sector, offering an investor perspective of the effects of disruptive technologies on African markets. Dosani argued that while banks and formal financial institutions will forever play a role in driving financial inclusion forward, they are not well positioned to leverage newer technologies and innovation to advance the sector. She further stressed that innovation efforts on the continent are fundamentally changing digital finance, bringing costs down and allowing companies to earn attractive returns on investment in low-income communities that would otherwise be left out of formal systems.

Dozie discussed some of the risks inherent in fintech innovation in Africa, and highlighted OneFi’s work in Nigeria to provide credit to individuals who lack access to financial services. Harry spoke at length about the 3D printing on the continent, especially in the manufacturing sector, and the ways in which it is impacting the future of learning. She stressed the need to incorporate exponential technologies in curriculums to prepare the next generation for what will be a tremendously different labor market and bridge Africa’s stubborn skills gap.

Those in attendance and participating in the discussion included H.E. Mninwa Johannes Mahlangu, ambassador to the Republic of South Africa; Ambassador Herman Cohen, former US Assistant Secretary of State for African Affairs; and a number of US and non-US government officials and business leaders.