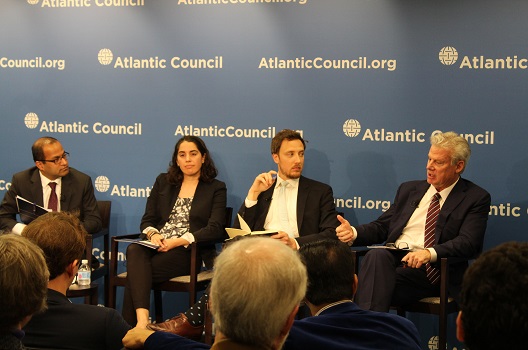 Iran’s missile program has long been a subject of controversy and the Trump administration has in recent weeks tied its continued implementation of a landmark 2015 nuclear accord to European support for more stringent curbs on Iran’s missile development.

At a Feb. 20 panel on the issue organized by the Atlantic Council’s Future of Iran Initiative, Michael Elleman, senior fellow for missile defense at the International Institute for Strategic Studies, noted that according to the 1987 Missile Technology Control Regime (MTCR), a missile capable of carrying a 500 kilogram warhead 300 kilometers is considered “nuclear capable.” By that definition, Elleman said, eight of 13 Iranian missiles could be considered nuclear capable. United Nations Resolution 2231, which codified the Iran nuclear deal, calls upon Iran not to test missiles “designed to be capable” of delivering nuclear weapons for eight years.

However, Elleman added that “capability does not equal intent.” He explained, for example, that while there is “strong evidence” that the Ghader missile was designed with nuclear weapons in mind, Iran’s two satellite-launched vehicles have been optimized for that function and have never been tested as ballistic missiles.

Elleman said that it was highly unlikely that Iran would ever relinquish its ballistic missiles, given the superior air forces of its adversaries, but that it might be possible to negotiate a ban on missiles with a greater than 2000 kilometer range since Iran has already said that it is not interested in developing longer-range missiles. He also downplayed reports of cooperation between Iran and North Korea on missiles, noting “very different approaches” in satellite-launch vehicles.

Aaron Stein, a resident senior fellow at the Atlantic Council’s Rafik Hariri Center for the Middle East, explained that ballistic missile use has been all too common in the region. He listed Egypt, Syria, and Turkey’s production capabilities, Saudi and Emirati imports from China and North Korea, and the ability of the Yemeni Houthis to reassemble Iranian rockets. He agreed with Elleman that “a 2000-kilometer cap on ballistic missile ranges in the region, I think, is ultimately a good idea.” Stein also said that it might be possible to convince Iran, which is not a member of the MTCR, to abide by its guidelines for exports.

Melissa Dalton, senior fellow and deputy director at the Center for Strategic and International Studies, said that Saudi Arabia and the United Arab Emirates have made significant investments in US technology for missile defense. She said the Gulf states chief concerns with Iran involved “support for its proxies, its information operation activities, and its cyber activities.” Dalton also noted that the US maintains “a considerable force presence” in the Persian Gulf region to deter any Iranian attack on US allies or forces. Dalton pointed to new US sanctions already imposed on Iran for its missile work and said more legislation is pending.

Bharath Gopalaswamy, director of the South Asia Center at the Atlantic Council, who moderated the discussion, noted that India and Pakistan have a bilateral agreement to notify each other in advance of missile tests and suggested that such notification would also be beneficial in the Persian Gulf.