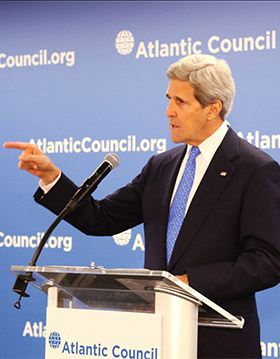 Secretary of State in Keynote Remarks: Crisis is ‘Wakeup Call’ for NATO

The Obama administration restated its support for NATO allies amid the Ukraine crisis today as Secretary of State John Kerry told European government ministers and diplomats that “we are prepared to … go the distance” to help NATO defend its members’ territory against conflict that might spread from Russia’s seizure of Crimea and its attacks on eastern Ukraine.

Kerry spoke at a two-day conference on the future of Europe sponsored by the Atlantic Council, restating US support for Ukraine and condemnation of Russia for what Kerry called its “zero” in implementing this month’s Geneva agreement meant to de-escalate the crisis. Russia has taken “not one single step” to implement the agreement, he said, telling officials, policy specialists and journalists that the conflict is “a wakeup call for us” for the NATO alliance.

“We find ourselves in defining moment for our transatlantic alliance, and nobody should mistake that,” Kerry said. The crisis underscore’s the need for NATO allies to take three steps, Kerry said.

“We cannot continue to allow allied defense budgets to shrink,” Kerry said.  He noted the NATO agreement to have all allies spend at least 2 percent of their gross domestic product on defense, saying “Its time” for member states that are not meeting that benchmark “to make credible commitments to increase their spending over the next five years.”

Kerry urged NATO allies to “do more together, immediately, with a sense of urgency, to ensure that European nations are not dependent on Russia for the majority of their energy.” And he urged alliance members to help complete negotiations for deeper economic cooperation through the Transatlantic Trade and Investment Partnership.

Excerpts from Kerry’s remarks included these:

On NATO’s need to shift its focus more to European defense. “After years in which NATO has focused on expeditionary missions as distant as Iraq and Afghanistan, “the crisis in Ukraine now calls us back to the role that this alliance originally was created to perform, and that is to defend alliance territory and advance transatlantic security.”

On the support for Ukraine to which Washington is now committed. “Together, we have to continue our strong support for Ukraine. And we can do that through econ assistance and we can do it through support for free and fair elections, for constitutional reform, for anti-corruption, and for de-mobilization efforts.  Most important, we have to make it absolutely clear to the Kremlin that NATO territory is inviolable.  We will defend every single piece of it. … and our allies on the front lines need and deserve no less.”