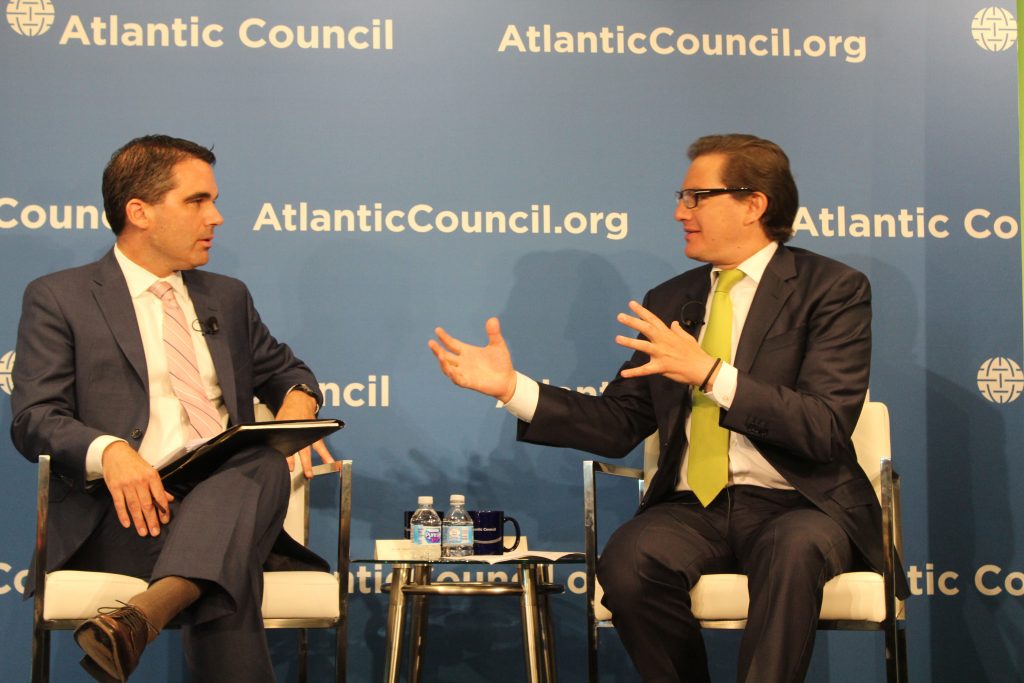 A poll on presidential elections in Mexico conducted by polling firm BGC in early May and published on April 20 placed Andrés Manuel López Obrador (AMLO) with a relatively comfortable lead garnering 42 percent of voter support. Ricardo Anaya Cortés of the Por México al Frente coalition followed in second with 33 percent of the vote. As support for José Antonio Meade slips below 19 percent, many believe that Anaya stands as the only candidate with a fair chance of challenging AMLO before elections are held in less than a month. The third in a three-part conversation series with advisers to each of the top presidential candidates, Salomón Chertorivski, government program coordinator for Anaya, joined a conversation with the Adrienne Arsht Latin America Center, in collaboration with the Wilson Center’s Mexico Institute, to present and discuss the policy priorities of Anaya’s platform.

Admiring Anaya’s coalition-building capabilities, Chertorivski began the conversation speaking about his reasons to become the presidential candidate’s top campaign adviser. He mentioned how Anaya’s diverse political background at the local and state level – he worked in the Ministry of Tourism under former PRI president Felipe Calderón – set him in a unique position to find common ground across the political aisle on key issues. To support his belief in the power of political coalitions, Chertorivski reminded the audience of how the 1990s political coalition in Chile ousted the military ruler Augusto Pinochet and how Angela Merkel managed to stay in power through a coalition between Social Democrats and Christian Democrats.

Chertorivski then outlined Anaya’s top priorities in four main areas: peace and security, honesty and anticorruption, inequality and economic development, and Mexico and the world. Chertorivski spoke first about the need to implement a new strategy for a more secure Mexico. The plan would attempt to dismantle not only the violent structure of organized crime but also employ technological tools to track the financial web that supports these criminals. The plan would also establish a Civil Security Ministry that would place the individual at the center of the security strategy, with a special focus on effective prosecution of femicide – a crime that has been off the charts in Mexico for many years.

On the topic of corruption Chertorivski explained that, for him, this behavior is not cultural, as many people believe. He used the example of North and South Korea, two countries with the same culture but two opposing systems of government. Anaya’s anticorruption plan emphasized the role of independent institutions and the use of technology to keep elected officials in check. At the national and subnational levels, corrupt politicians – and their political parties – will be barred for life from seeking reelection, corrupt businesses will be barred from public contracts, and a campaign of public bashing will be levied against every person and entity involved.

Chertorivski then spoke about inequality and how Anaya does not envision a structural change in Mexico’s current economic model, but rather tweaking key elements of it to enable inclusive growth, increase public investment, and facilitate private investment.

On the fourth priority issue, Mexico’s foreign policy, Chertorivski commented that Anaya wants to seek new trade deals with Latin American partners. But most of the conversation about international affairs centered on US-Mexico commercial and security relations. Chertorivski believes NAFTA is in dire need of technical innovation and modernization and urges negotiators to reach a deal as soon as possible because it will signal certainty to investors. He supports the origin rules as being beneficial for both US and Mexico, but expressed his opposition to the sunset clause, calling it a deal breaker. Chertorivski added that a strategy on border security must revolve around individuals, but the conversation on drugs, weapons, and violence must be discussed collectively, not individually.

The role of technology in Anaya’s platform and his stance on the 2013 energy reform were two other key topics Chertorivski commented on. According to Chertorivski, Mexicans are above the global average in entrepreneurship capabilities and to tap this enormous potential, he suggests forming an entrepreneurial ecosystem to incentivize talented youth in Mexico. On energy, Chertorivski strongly believes in honoring the private contracts awarded under the reform but insisted that PEMEX, the state-owned petroleum company, must restructure its governance and budget. He added that Anaya is committed to enabling a faster transition toward clean energy, aiming for an energy matrix with a renewables target of 40 percent (5 percent higher than the goal set under the reforms).

Chertorivski ended the conversation outlining Anaya’s strategy moving forward: focusing on winning strategic votes, shifting voters’ conversation from an emotional one to a more rational one, finding ways to clearly contrast Anaya’s proposals with the visions of the other candidates, and addressing the role of technology in Mexico’s future.