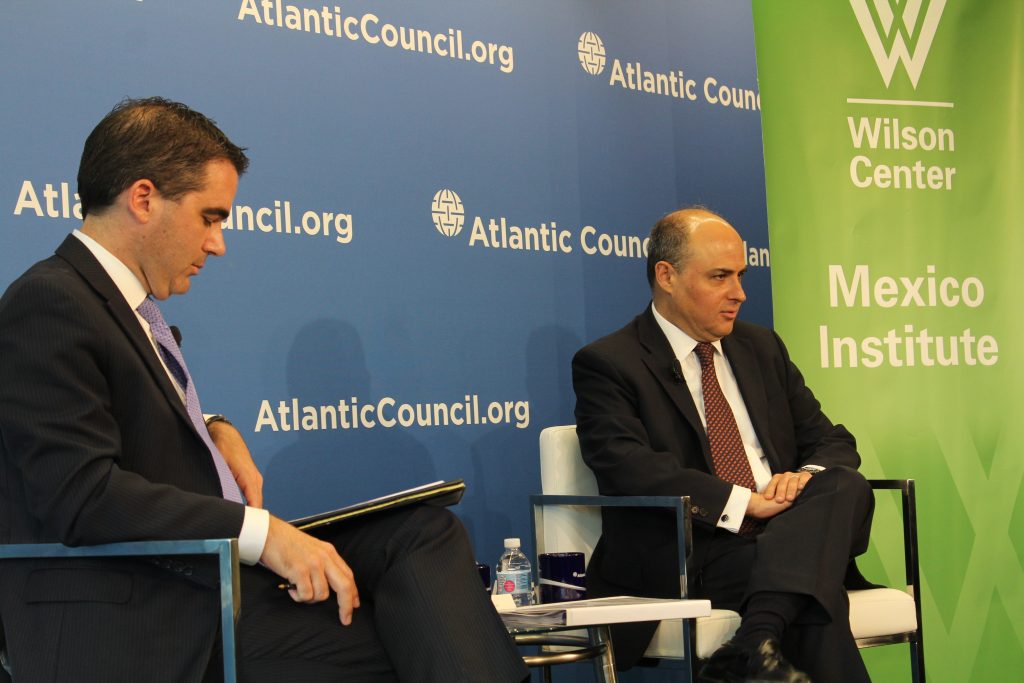 As Mexican voters grow increasingly discontent with years of corruption and unequal economic growth, Andrés Manuel López Obrador (AMLO), the anti-establishment candidate in Mexico’s upcoming presidential elections, holds tightly to his lead in the polls. At a crucial moment for Mexico’s trade under NAFTA and US-Mexico relations, six years of AMLO could mark a turning point for the country’s future. But if he does not win, what can Mexico, and the world, expect from the other leading candidates? For the second in a three-part conversation series with advisers to each of the top presidential candidates, the Adrienne Arsht Latin America Center, in collaboration with the Wilson Center’s Mexico Institute, hosted Sergio Alcocer, government program coordinator for José Antonio Meade of the Todos por México coalition, for a dynamic discussion about the proposals of the presidential candidate who is currently in third place.

Alcocer began the moderated discussion answering a question about his motives to join Meade’s campaign. “I trust Meade to lead a country my kids can feel safe and thrive,” he said.

He then spoke about Meade’s top four issues, packaged under the umbrella of rule of law: insecurity, economic inequality and unemployment, quality of life, and corruption. He was quick to note that the media has played a significant role in distorting the reality behind these issues, particularly with false claims of pervasive corruption at the national and subnational level.

Alcocer first addressed the topic of insecurity. He proposed a complete reengineering of the justice system with a dual-pronged strategy that includes establishing an independent justice agency and training the police for prevention and investigation, two areas where it is currently failing. Alcocer described the Mexican justice system, a hybrid of the US system and an outdated Mexican system, as insufficient and incapable of addressing the challenges of twenty-first-century crimes. In Mexico, around two million crimes are committed annually with an unacceptable impunity rate of at least 97 percent. The 2008 Mérida Initiative, a security and intelligence-sharing agreement among Mexico, US, and other Central American neighbors, could serve as a foundation for further progress in security, but said that a lot more must be done.

On the issue of economic development, Alcocer briefly mentioned strengthening Mexico’s already-strong manufacturing sector through more trade with NAFTA countries and other partners, while focusing more on promoting inclusive growth. To decrease the informal economy, which accounts for about 60 percent of the population, Alcocer described Meade’s plan known as Avanzar Contigo (Advance with you). The strategy asks the needs of the people and provides tailored government programs, with two key components: empowering women – 50 percent of the workforce – and the young population by facilitating access to credit, scholarships, job opportunities, and creating an environment for entrepreneurs to thrive.

Alcocer then moved to the issue of corruption in Mexico’s government. He divided Meade’s anti-corruption platform in three areas: requiring elected officials to present a declaration of consistency between salary and living expenses, tackling impunity, and promising transparency in the entire process of awarding public contracts. Alcocer recognized that the strongest challenge for corruption was at the local level, where elected officials can more easily escape federal oversight and where organized crime is still an evasive influence in the more unstable regions.

Alcocer also commented on the first presidential debate on Sunday, April 22 saying that the debate went as he expected and applauded Meade for a clear presentation of his proposals. Meade’s campaign rhetoric moving forward, will concentrate largely on highlighting the potential or perceived consequences of each candidate’s proposals. For example, he compared a would-be Meade administration with a López Obrador administration stating that “under the former, Mexico would thrive with strong trade, inclusive growth, and foreign direct investment while the latter would be plagued by protectionism and over-extension of government.”

The highly contested 2013 energy reform and Meade’s foreign policy priorities were the final topics discussed. As former energy minister, Alcocer said that Meade has the necessary knowledge and experience to best address this issue. Claiming that oil revenues have declined in past few years (manufacturing is now Mexico’s strongest driver of growth), he advocates to preserve the energy reforms – with minor modifications. By trying to please too many players, the reforms hinder efficiency and new projects. Meade also welcomes more investment in solar energy and diversifying Mexico’s energy matrix.

Alcocer also alluded to Meade’s role as foreign minister and how that background, particularly his efforts to improve trade with Pacific Alliance members, gives him a competitive advantage over his opponents in foreign policy. Alcocer mentioned that he acknowledged the need for a modernized NAFTA and does not disagree with current negotiations on any of Mexico’s current stances. However, he did emphasize Mexico’s role as an important commercial partner with countries not only in the Western Hemisphere, but also win Europe and Asia. As an advocate of open markets and climate protection, Alcocer echoed Meade’s commitment to improving current trade relations with the EU and Pacific Alliance and pursuing new ones, such as the recently-signed CPTPP, and reaching Mexico’s goals to reduce carbon emissions under the Paris Accord.

Lastly, Alcocer commented on US-Mexico relations and President Trump’s influence in Mexico’s presidential elections. While Mexican voters are aware of President Trump and domestic US politics, Alcocer believes these issues are not at the forefront of voter’s minds and therefore will not have a major influence in the elections. However, Alcocer recognizes the strategic importance of US-Mexico relations beyond trade, stating that, if elected, Meade plans to work closely with the US to improve the local economies of the Northern Triangle countries as a way to reduce violence and unauthorized migration.