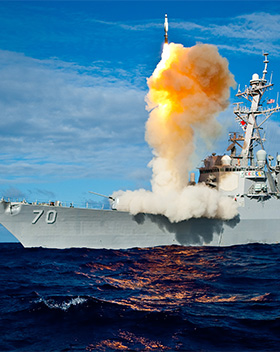 Speaking at the Atlantic Council’s Global Missile Defense Conference on May 28, Admiral James A. Winnefeld, Jr., Vice Chairman of the Joint Chiefs of Staff, announced a plan to reinforce its regional missile defense arrays in Northeast Asia by deploying a $950 million Terminal High Altitude Area Defense (THAAD) battery to South Korea. This announcement comes on the heels of the United States’ efforts in recent years to expand collaborative defense architectures with its allies in the Asia Pacific.

According to David Gompert, former Principal Deputy Director of National Intelligence, the new investments in missile defense in Northeast Asia underscore the threat from North Korea’s unabated nuclear program. Recent activity at North Korea’s nuclear test site indicates that North Korea may be preparing for a fourth nuclear test. While China openly objects North Korea’s nuclear tests, it remains wary of US-led initiatives to bolster missile defense in South Korea and Japan and warned that another deployment in South Korea would “not help maintain stability and strategic balance in the region.”

Despite China’s objections, Patrick Cronin argued that missile defense remains a critical component of the region’s ability to deter and protect itself from North Korean missiles. The “only solution” to the North Korean threat, according to Gompert, was a trilateral effort between the United States, South Korea, and Japan. Both the South Korean and Japanese leaders have recently become more serious about defense, spurred by North Korea’s test launches earlier this year and uncertainty over China’s more robust defense posture, but independently of one another. While the United States has strong bilateral defense ties with both countries, it needs to be “much more impatient” in pushing Japan and South Korea closer together. Cronin asserted that the best and most politically viable option was developing a fully integrated US-Japanese missile defense system that was interoperable with South Korea’s missile defense system, due to South Korea’s political reticence to fully rely on US missile defense assets over its own.

What would a fully functioning missile defense system mean for regional security dynamics? First, the panelists posited that it would reduce, but not eliminate the threat from North Korea. If the missile defense array eliminated North Korea’s missiles as a significant threat, it would still be able to attack South Korea with its vast arsenal of conventional artillery and rockets and the ever-present threat of various types of weapons of mass destruction. Second, it would not be a “game changer” with China, which would still be able to strong arm neighbors with its conventional arms, its strong navy, and political, diplomatic, and economic levers. Third, missile defense should never be viewed as a measure of first resort in Northeast Asia, but rather one additional “tool in the toolbox” that counters North Korea’s aggression.

Despite political hurdles, there is little room error in developing a missile defense architecture considering what is at stake. With so many dangers packed into one concentrated region of Northeast Asia, the difference between preemption and reaction to a missile launch will come to down to seconds and minutes rather than hours or days. Therefore, as the panelists articulated, the best insurance measure against a missile launch is a trilateral US-South Korean-Japanese missile defense architecture that is as integrated, or at least as interoperable, as possible.

This panel was part of the Atlantic Council’s annual conference on the United States and Global Missile Defense which focuses on recent developments in missile defense architectures in Europe, the Middle East, and Asia and how global missile defense is likely to look in the year 2030.