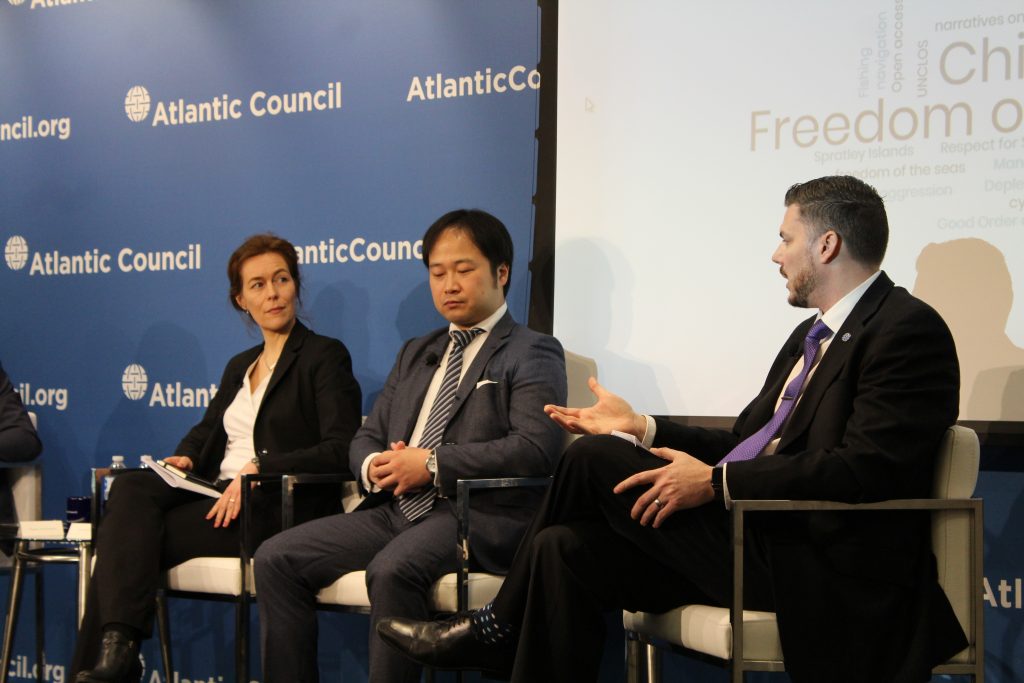 What is the state of play in the East and South China Seas, and what might be the future of maritime rules and norms in the region? To answer these questions, the Atlantic Council’s Scowcroft Center for Strategy and Security convened several experts for a public panel discussion on March 30, 2018. With panelists representing Asian, European, and American perspectives, the panel reflected the mission of the Scowcroft Center’s burgeoning Asia program—bridging the Atlantic and Pacific policymaking communities to build trans-Atlantic-Pacific partnerships and confront common challenges.

The topic of East Asian maritime security presents one such potential area of collaboration. As nation-states throughout Asia have become more and more assertive about their territorial claims, some have shown an increasing willingness to test international norms surrounding the use of the world’s oceans and seas. The South and East China Seas have become proxies for larger geopolitical contests, and with the rising prevalence of “gray zone” aggression, the regional security environment has taken on echoes of other conflicts such as Ukraine and Syria. Throughout the discussion, the lessons learned from those conflicts resurfaced repeatedly, helping to inform thinking about the path forward.

In his opening remarks, Admiral Dennis Blair delivered a critical assessment of China’s maritime strategy, arguing that though China’s aggression might have given it the tactical upper hand, it had compromised its strategic position. By acting so assertively, it has alarmed other nations, leading to the consolidation of an informal group of countries opposed to its activities. In his appraisal, this did not mean that conflict was inevitable—however, it reflected the deep rift between Chinese and American interests, one which was unlikely to be resolved without a transformation of either domestic politics or global power between one or both countries.

Dr. Sarah Kirchberger, head of the Center for Asia-Pacific Strategy and Security within the Institute for Security Policy at Kiel University, underscored the three categories of threat perception underlying Chinese strategy: the political-ideological fear of the capitalist West; the geostrategic worry about China being “hemmed in” by a series of island chains; and the military-technological anxiety around other countries’ perceived efforts to counter their own capabilities. Mr. Tetsuo Kotani, senior fellow at the Japan Institute of International Affairs, emphasized the Japanese perspective and spoke on the concerns surrounding increased activity such as a change in Chinese aggression around the Senkaku Islands from a “3-3-2” pattern to a “3-4-2” pattern (3 times every month, 4 ships enter for 2 hours). Mr. John Watts, nonresident senior fellow at the Atlantic Council’s Scowcroft Center for Strategy and Security, called for a need to think more broadly about maritime security—expanding it from a narrow focus on freedom of navigation operations to a discussion about the changing of international norms, such as seen in the cancellation of the Repsol deal in Vietnam. The panelists emphasized the need for countermeasures to balance against China’s actions, addressed emergent threats including space and cyber, and underscored the need to more viscerally communicate the nature of the challenges in the region.