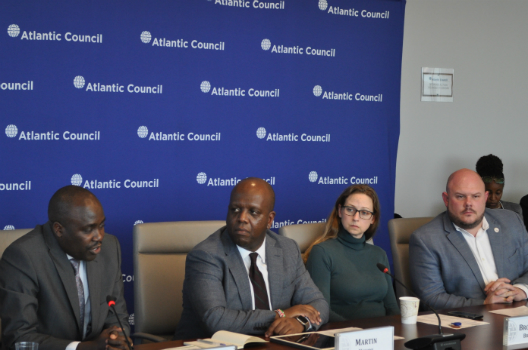 On Monday, October 16, the Atlantic Council’s Africa Center, in collaboration with the International Republican Institute (IRI), hosted Ambassador Martin Kimani, director of Kenya’s National Counter Terrorism Centre and special envoy for countering violent extremism, and Dr. Korir Sing’Oei, legal adviser in the executive office of the deputy president of Kenya, for a private roundtable discussion on the security situation in Kenya amid its unprecedented and ongoing electoral crisis.

In his remarks, Kimani stressed the importance of using Kenya’s legal system to mediate political disputes and asserted that violent actions and threats would undermine Kenyan democratic institutions. To resolve this current period of political and electoral instability, Kimani said that Kenya needs constitutional and political legitimacy, including an effort by the next president to help Kenyans heal. Kimani also expressed concern that the October 14 bombing in Mogadishu, Somalia had heightened security tensions in Kenya at a time when police and military resources are already strained.

Sing’Oei detailed the electoral challenges facing Kenya before the October 26 rerun, stressing the importance of holding the election before constitutional limits on the election rerun expire and Kenya enters an extra-constitutional “twilight zone.” Sing’Oei highlighted efforts of the Kenyan government to de-risk the electoral process, including the creation of a parallel ballot system to complement the electronic transmission of ballots, an issue at the heart of the August 8 election dispute.

A discussion, moderated by Bruton, followed Kimani’s and Sing’Oei’s prepared remarks. Participants engaged the speakers on Kenya’s electoral laws and the US-Kenya relationship, while questioning the Kenyan government’s securitized response to opposition protests.

Also in attendance and participating in the roundtable were a number of US and non-US government officials, business leaders, and civil society actors.