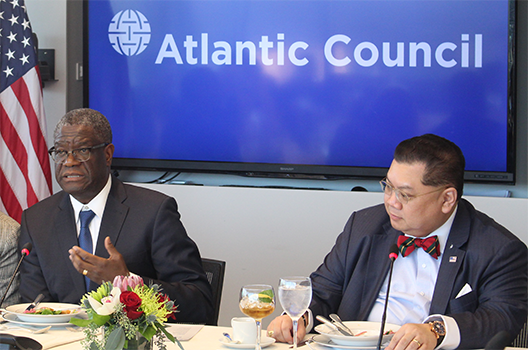 On January 28, the Atlantic Council’s Africa Center hosted Dr. Denis Mukwege, founder and medical director of Panzi Hospital and 2018 Nobel Peace Prize Laureate, for a discussion on the use of rape and sexual violence as a weapon of war in the Democratic Republic of the Congo (DRC).

Introducing the distinguished guest, Atlantic Council Vice President and Africa Center Director J. Peter Pham highlighted the magnitude of Mukwege’s work over the years, treating more than 85,000 women and girls since 1999 – 50,000 of whom have been survivors of sexualized violence – and doing so with a unique combination of medical treatment, psycho-social support, community reintegration, legal assistance to pursue justice, and advocacy.

In his remarks, Mukwege discussed the magnitude of gender-based violence in the DRC, touching on the two decades of work by the Panzi Hospital, a 450-bed facility in Bukavu, South Kivu, in the eastern part of the Congo, to combat the problem. He argued that wartime sexual violence should be banned under conventions similar to those regulating weapons of mass destruction and anti-personnel mines, with prescribed punitive measures against violators. He stated that pressure and action from the international community, including the imposition of targeted sanctions when appropriate, working in conjunction with those affected, was the only way to end the culture of impunity that facilitates gender-based violence in conflict areas and continues to destabilize the DRC.

Touching on the recent presidential, legislative, and provincial elections in the DRC, Mukwege expressed the hope that newly-inaugurated President Félix Tshisekedi would reverse the longstanding stance of denial that the previous regime took towards sexual violence and grant international aid workers necessary access to victims and clinics. He also called on the new president to combat corruption and prosecute the elites, corporations, and foreign powers whose predations have impoverished the Congolese people and stirred instability for too long.

A discussion followed his remarks in which participants engaged Mukwege on the recent elections, measures to combat impunity for sexual violence crimes, and the role of religious institutions and the international community as well as local stakeholders in the fight to end gender-based violence in conflict.

Among those in attendance and participating in the discussion were several high-level current and former US government officials as well as representatives of other think tanks as well as advocacy organizations.