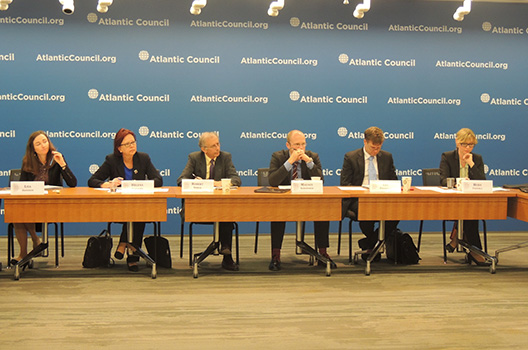 On May 21, the Atlantic Council’s Brent Scowcroft Center on International Security held a workshop on Nordic Security and the Transatlantic Link with leading regional experts and senior government officials from the United States and Nordic-Baltic region.

In an age of transatlantic austerity and questioning of North America and Europe’s role in the world, the Nordic region stands out as an example of innovation and leadership in the realm of defense and security policy while using limited means. Today, however, the broader Nordic region is facing a changing security landscape which is made increasingly complex by the emergence of the Arctic as an active political, economic, and security arena, and a more assertive and more capable Russia in the Baltic Sea region and beyond. Russia’s recent large-scale exercise is a disturbing sign of the potential volatility of the Arctic as the region increasingly presents its economic and geopolitical value.

This workshop, conducted in partnership with the Ministry of Defense of Finland, convened leading experts, thought leaders, and policymakers to analyze the current state of the Nordic-Baltic security landscape and sustaining effective transatlantic engagement in the region. The workshop focused on US security and defense commitments in northern Europe, future developments in European security and regional defense cooperation, the role of NATO in the region, and Russia’s engagement in the region against the backdrop of the conflict in Ukraine and deteriorating relations with the West.