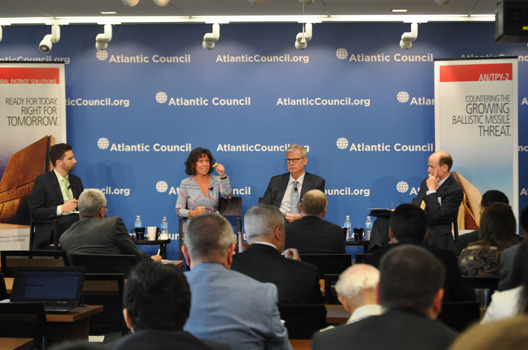 According to the particpants on the Brent Scowcroft Center’s missile defense panel entitled, “Defense Cooperation in the Gulf: How Far Can We Go?”, the policies of the United States and the asymmetric threats of Iran are driving cooperation in the Gulf that might have been unimaginable just one year ago.

The United States has long held interoperable missile defense as a goal for the Gulf, but political differences among the Gulf Cooperation Council (GCC) states have made the requisite cooperation difficult to achieve. However, perceptions of a faltering US commitment to regional partners, combined with the belief that the parameters of the current nuclear deal between the P5+1 and Iran ignore the latter’s troubling asymmetric capabilities, have driven the Gulf states closer together. Saudi Patriot missiles’ interception of a Scud fired from across the Yemeni border earlier this month highlighted both the threat of Iran’s proxy activities and the continuing importance of missile defense to the GCC.

Add to these security factors the easing tensions between Qatar – which has decreased some of its public support for the Muslim Brotherhood and other controversial nonstate actors – and the rest of the GCC, and the near-term prospects for missile defense cooperation appear more likely.

That being said, the Gulf states still face many challenges in translating political cooperation into interoperable missile defense. As Cosgriff pointed out, all of the GCC states have significant ground to cover in developing sufficient missile detection and surveillance systems and training the personnel and officials to operate them. Elleman noted that, while the Gulf states are often frustrated with the slow pace or unavailability of defense technology transfers with the United States, they lack the necessary strategies and policies to establish an effective missile defense shield. And Schake highlighted the need for GCC states to formulate strategies not just for shooting down incoming missiles, but also for calculating a response to the source of the attack.

All three panelists pointed to NATO as a strong example of missile defense cooperation for the Gulf. Schake noted that NATO processes matter immensely – the countries within the alliance benefit greatly from repeated training, rotating leadership, and dual-track cooperation. Cosgriff added that regular training like NATO’s would be absolutely necessary for the Gulf states, as NATO members who joined after the Cold War are only just maturing in the workings of the alliance’s defense system. Elleman was relatively optimistic for the prospect of NATO-style cooperation in the Gulf, noting that the regional officials he interviewed were greatly interested in the workings of the alliance.

The GCC states may finally have summoned the political will necessary for an interoperable missile defense system, but they need to lay the strategic groundwork before they can make true progress.