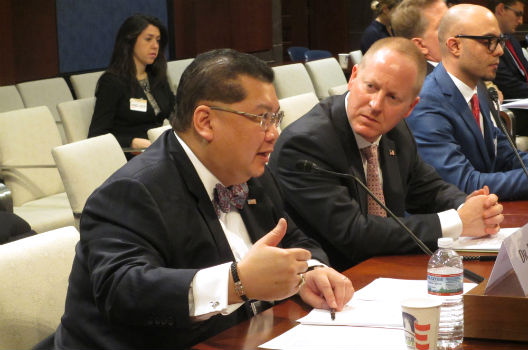 On Wednesday, March 29, Atlantic Council Vice President and Africa Center Director Dr. J. Peter Pham testified before the US House of Representatives Homeland Security Committee on “Terrorism in North Africa: An Examination of the Threat.”

Africa’s northwest Maghreb region is home to some of the longest-running terrorist campaigns on the African continent, a situation that has become all the more combustible in recent years with the emergence of so-called Islamic State (ISIS) “provinces” amid the disintegration of Libya, alongside preexisting groups like al-Qaeda in the Islamic Maghreb and still other Islamist bands which emerged in the wake of the collapse of Muammar Gaddafi’s dictatorship.

In his testimony at the hearing convened by the Subcommittee on Counterterrorism and Intelligence, Pham suggested that it is the Sahel—one of the poorest majority-Muslim regions in the world as well as the largest expanse of contiguous ungoverned space on the African continent—that is most vulnerable to exploitation by jihadist groups, many of which are already operating in fragile states like Mali, northeastern Nigeria, Burkina Faso, and Niger.

In attempting to respond to this evolving but resilient threat to US interests in North Africa—and to the US homeland writ large—Pham urged the United States to work with regional and international partners who have proven themselves allies in combatting terrorism. Pham used examples of Morocco, which has established one of the most effective counter-radicalization programs in the region, as well as France, which has committed significant resources to the UN-backed stabilization mission in Mali.