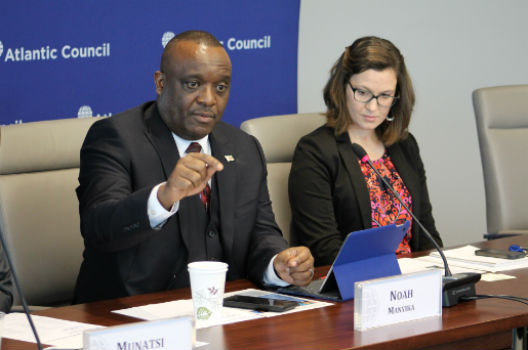 On Tuesday, November 29, the Atlantic Council’s Africa Center hosted Noah Manyika, convenor of the Build Zimbabwe Alliance, for a roundtable discussion on Zimbabwe’s opposition parties and the political landscape in the country ahead of the 2018 presidential elections.

In his remarks, Manyika focused on the need for political renewal in Zimbabwe, highlighting the need for opposition parties to unite around a common strategy if they are to provide a credible alternative to President Robert Mugabe’s Zimbabwe African National Union Patriotic Front (ZANU-PF) in the 2018 elections. Manyika emphasized the need to invest in viable candidates seeking to run for political office, particularly at the parliamentary level. Manyika explained that, regardless of the outcome of the ongoing factional battles within ZANU-PF, it is important for Zimbabwean citizens to focus on holding their leadership to account.

The discussion that followed focused largely on the importance of a united political opposition in the run up to the presidential election, as well as the concern about state-sanctioned violence against social movements gaining traction in the country.