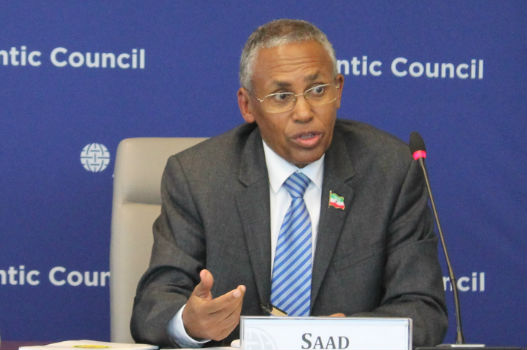 On Tuesday, May 23, the Atlantic Council’s Africa Center hosted Dr. Saad Ali Shire, minister of foreign affairs and international cooperation of the Republic of Somaliland.

In his remarks, Shire emphasized Somaliland’s continued status as an island of peace and stability in the troubled Horn of Africa region, its consolidation of security and governance gains, and its relative success in spurring economic development, despite the world’s longstanding refusal to grant Somaliland recognition as an independent nation. (Somaliland declared independence from Somalia two and half decades ago, in 1991). A severe drought has inflicted terrible damage on Somaliland’s economy, killing a majority of the country’s livestock and aggravating youth unemployment. Shire affirmed the government of Somaliland’s commitment to holding elections in November 2017, after a three-year delay. Shire voiced concern at Somaliland’s inclusion in the Trump administration’s proposed travel ban, but expressed his hope that Somaliland could continue to work toward both independence and regional stability.

Africa Center Director of Programs and Studies and Deputy Director Bronwyn Bruton introduced Shire and moderated the ensuing discussion, which included attendees from the US government, non-profit sector, and academia.