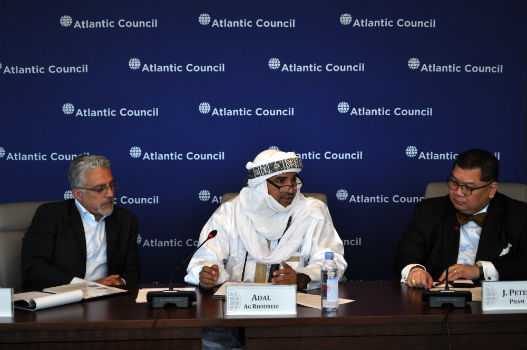 On Tuesday, October 17, the Atlantic Council’s Africa Center hosted Dr. Adal Ag Rhoubeid, President of the Movement for Democratic Renewal (MDR) Tarna, for a private roundtable discussion on the security situation in Niger and the broader Sahel region.

Rhoubeid provided an overview of the security situation and role of the Tuareg people in Niger, focusing specifically on the country’s northwestern region, which borders Mali. He suggested that Tuareg grievances about economic and political marginalization by the central government, which are amplified by dire economic and development realities, give militancy and criminality a “seductive” appeal for Niger’s youth.

The criminal and terrorist elements that operate across Niger and the Sahara are well-armed, culturally savvy, and organized, he noted. Rhoubeid described the Nigerien army as ill-equipped to take on these groups, which are buoyed by millions of dollars in revenue from the drug trade. But Rhoubeid eschewed a purely military solution to Niger’s security challenges, arguing that legitimate and accountable local governance was a vital piece of the puzzle.

A discussion, moderated by Atallah, followed Rhoubeid’s prepared remarks and focused on the role of the United States in cooperatively tackling security threats across the Sahel, as well as the impact of Niger’s neighbors Nigeria, Algeria, Mali, Libya, and Burkina Faso on regional security.

Also in attendance and participating in the roundtable were a number of current and former US government officials, business leaders, and civil society representatives.