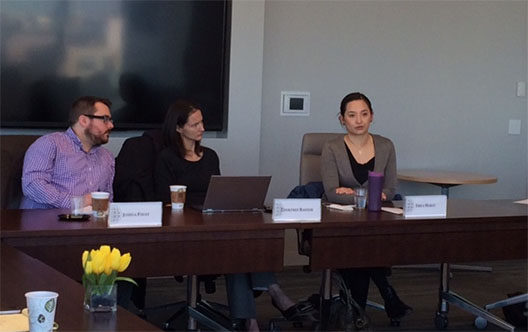 Eurasia Foundation and the Atlantic Council were please to host a discussion on security in Central Asia.While most of the world faces Ukraine, security in Central Asia continues to be at the forefront of issues facing Eurasia. The 2014 US withdrawal from Afghanistan, ongoing negotiations of the Northern Distribution Network, and Russia’s continued push for economic and military influence in the region are among the primary issues in the region. Dr. Erica Marat and Ms. Courtney Ranson discussed US policy toward Central Asia, Russia’s massive effort to exclude the United States through political and media campaigns, and China’s efforts to keep Central Asia out of the orbit of Western influence.

Dr. Erica Marat is a visiting scholar at the Kennan Institute of the Wilson Center. She is an expert on security issues in post-communist countries, with a focus on military, national, and regional defense, as well as state-crime relations. Dr. Marat previously worked at the Voice of America’s Russian Service and was a research fellow at the Central Asia-Caucasus Institute and Silk Road Studies Program, which is affiliated with the Paul H. Nitze School of Advanced International Studies of Johns Hopkins University. She is an associate with the Central Asia Program at the George Washington University.

Courtney Ranson worked for over four years as a media analyst with the US Government, concentrating on the impact and development of media and social media in Eastern Europe and Central Asia. Ms. Ranson subsequently worked briefly as a consultant for the Carnegie Endowment for International Peace. She has a Master’s degree in Russian and East European Area Studies and speaks Russian, French, and Polish.