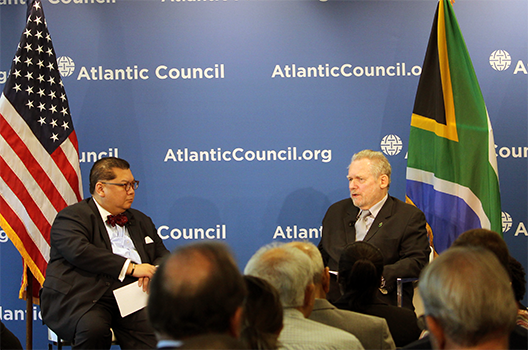 On Friday, July 13, the Atlantic Council’s Africa Center hosted a conversation with Minister of Trade and Industry of the Republic of South Africa the Hon. Rob Davies.

In his prepared remarks, Davies discussed ways in which South Africa is looking to accelerate economic growth, trade, and investment on the African continent. He highlighted South Africa’s recent signing of the African Continental Free Trade Agreement (AfCFTA) at the African Union Summit in Mauritania as the first step in a larger drive to help African countries play a greater role in the global economy, uniting states with a combined GDP of more than two trillion dollars. Davies also emphasized South Africa’s desire to modernize its economy and education systems to effectively address future challenges, closing the skills gap to prepare for the the digital revolution and the rapid automation of labor. He concluded by reiterating South Africa’s desire to deepen its relations with American companies and strengthen a mutually beneficial economic relationship with the United States.