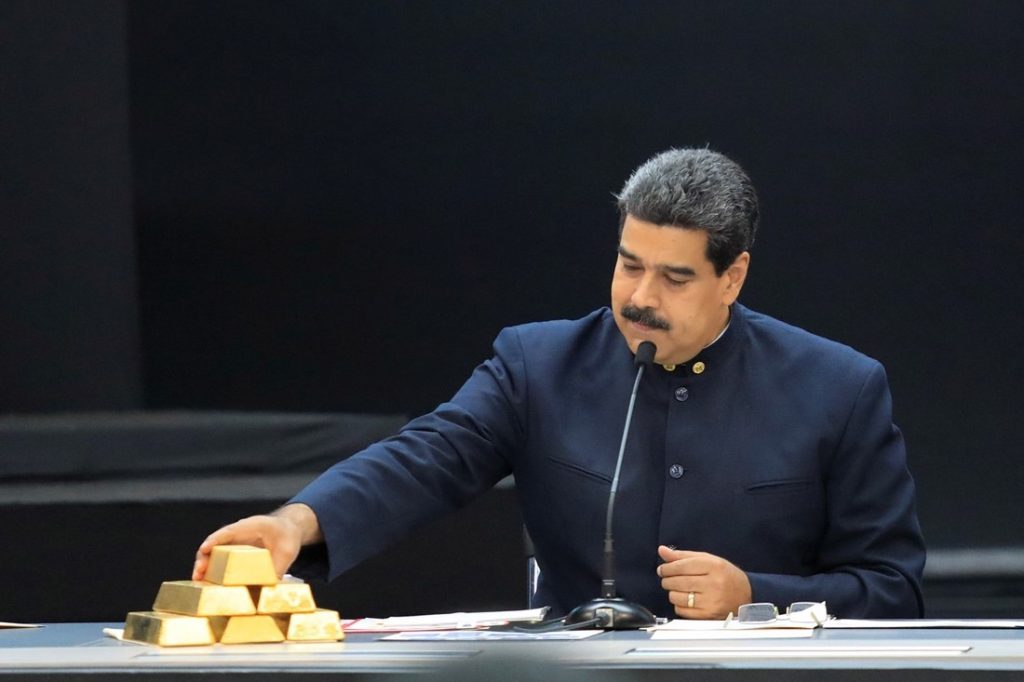 On January 9 the Adrienne Arsht Latin America Center held a public event discussing the illicit activities that support Nicolás Maduro’s regime financially, and how to stem them. The event took place just a few days after the Maduro regime prevented opposition leader and President of the National Assembly, Juan Guaidó, from participating in the National Assembly’s leadership vote.

Jason Marczak, director of the Adrienne Arsht Latin America center, opened the two event panel with introductory remarks framing the day’s discussions within the protracted Venezuelan crisis, which is maintained by Maduro’s illicit sources of revanue. The first panel was moderated by Emiliana Molina, Washington political correspondent of Nuestra Tele Noticias 24 (NTN24). The panel featured Américo de Grazia, Venezuelan National Assembly representative for the State of Bolívar, and presidential commissioner for the Mining Arc; Miguel Pizarro, National Assembly representative for the State of Miranda, and presidential commissioner to the United Nations; and Diego Area, associate director at the Adrienne Arsht Latin America Center. The second panel, moderated by Marczak, explored the US congressional perspective on Venezuela. It featured a bi-partisan conversation with US Congressional Representatives Deborah Wasserman Schultz (D-FL), and Francis Rooney (R-FL).

Kicking off the first panel, Molina asked representative Pizarro about the ongoing political crisis surrounding Venezuela’s National Assembly and whether there would be two National Assemblies in the country. Pizarro emphasized that the Maduro regime had taken the legislative branch by military force, which was a fraudulent attempt to usurp the National Assembly, and that despite the recent developments, Venezuela still has only one National Assembly with 167 members.

Changing gears, Molina asked De Grazia to provide more insights on the groups involved in illegal mining in Venezuela. De Grazia replied that since Hugo Chávez was in power, the Maduro regime has been closely linked to a variety of criminal mining activities in the Southern Orinoco region, which are managed by various criminal groups. De Grazia explained that there are three types of organizations operating in the mining arc. First, the regime uses former prison gang-leaders, locally known as “pranes,” to lead 1,900 mining operations across the region. The regime also makes use of “colectivos,” which are paramilitary groups directly tied to the regime. And, according to De Grazia, terrorist organizations such as the Ejército de Liberación Nacional (ELN), Fuerzas Armadas Revolucionarias de Colombia (FARC), Hezbollah, and Hamas also have illegal mining operations in Venezuela.

When asked about Maduro’s strategy for 2020, Diego Area mentioned that Maduro’s strategic priority is to take control of the National Assembly. According to Area, there are four reasons that explain this. First, retaking the National Assembly would give Maduro’s regime additional control over economic activities; second it would harm Guaidó’s legitimacy; third, it would disassemble efforts to democratize the country; and fourth, it would deflate international pressure on Venezuela. Area concluded that the best response to Maduro’s strategy is to consolidate international support for the Venezuelan opposition.

After discussing the precarious human rights situation in the Mining Arc, the three speakers agreed that it was critical to bolster international support—especially European—for the Venezuelan opposition.

Area also highlighted the regime’s efforts to control the narrative, and to disseminate propaganda through social media where most Venezuelans get their news because local news agencies are controlled by the state. According to Area, the regime has also tried to expand these disinformation operations beyond Venezuela, seeking to polarize public opinion in other countries, Chile for example.

Area concluded by saying that Guaidó represents a reconstruction of Venezuela, one that moves forward, and is diverse, inclusive, and democratic. He stated that political parties should be the pillars of democracy, but that civil society should also be included in the decision-making process.

A Congressional Perspective on Venezuela

Opening the second panel, Jason Marczak asked Representatives Schultz and Rooney what their message to the National Assembly would be. Representative Schultz responded that she appreciates the efforts to discuss the Maduro regime’s recent unlawful actions and that the best way to restore democracy is “by shining light on darkness.” Schultz said that in the United States there is overwhelming bipartisan support to assist Venezuela in restoring democracy. She added that hundreds of millions of dollars have been appropriated for humanitarian assistance 41.5 million dollars have been secured specifically for the direct support of the interim government of Venezuela.

Schultz added that she has supported and sponsored several pieces of legislation that sought to penalize bad actors in Venezuela, such as the VERDAD Act and the Russian-Venezuelan Threat Mitigation Act. She also stated that Russia and Cuba have played a key role in supporting Maduro’s regime.

Concluding the conversation, Representative Rooney said that he used to work at an oil company in Venezuela, and he saw Venezuela descend from a country with a strong middle class and healthy institutions into ruins. He added that the United States will continue helping Venezuela with legislative and travel restrictions against “bad actors.” However, Rooney pointed out that to be more effective, the US must coordinate actions with Europe, and assist Colombia and Peru with the refugee crisis.